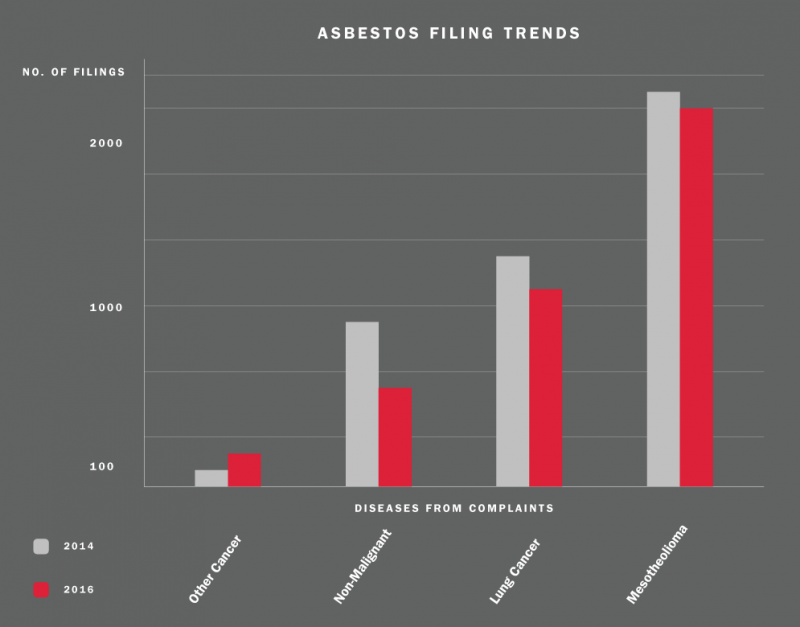 2016 KCIC Asbestos Report Indicates that While Total Number of Asbestos Filings Decreased, Filings for Mesothelioma and Lung Cancer Did Not

Malignant mesothelioma and lung cancer claims are now making up an even greater percentage of asbestos claims, according to the 2016 KCIC asbestos report. KCIC, a mid-sized consulting firm for mass tort and other complex product liabilities, released its 2016 report showing that while the amount of asbestos filings has dropped from 5,333 in 2015 to 4,637 in 2016, the filings for the most serious asbestos-related diseases have not followed this trend.

The top ten plaintiff’s firms, based on the number of asbestos cases filed by each firm, make up just under 62% of the total filings in 2016. This is a slight increase from 2015. Worth noting is that roughly 99% of the asbestos cased filed by these firms were either for mesothelioma or lung cancer.

Similarly to the plaintiff’s firms, the top ten defendant corporations named in the most asbestos filings remained the same as 2015. At least one of the top ten corporations was named in 98.9% of filings, and the top-named defendant corporation alone appeared in 87.8% of the claims. The average number of defendants named in each claim remained a consistent 66, but the average ranges from 19 to 212 depending on plaintiffs’ firm and jurisdiction. The large number of defendants named per case shows that asbestos exposure wasn’t the result of a single corporation’s actions, but that there was a cumulative effect of entire industries that failed to properly protect workers.

What Do the Statistics Suggest?

The statistics for 2016 allow for the following trends to be speculated for 2017: