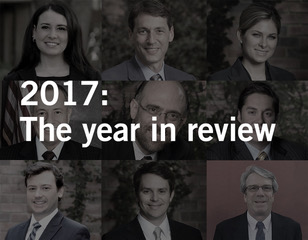 As we come to the end of 2017 and the beginning of 2018, we take it as a time of both reflection over our past work and as inspiration and preparation for what is to come.

Houston Doctor Settles Medicare Fraud Charges for $1.5M
A lawsuit brought by a whistleblower nurse alleging 7.5 years of Medicare fraud committed by Houston doctor and his practice settled for $1,575,000. The whistleblower is represented by Charles S. Siegel and Kay Gunderson Reeves of Waters & Kraus, LLP in Dallas, Texas and Robert Talaska of The Talaska Law Firm in Houston… READ MORE

Family of Boston Letter Carrier Receives $6.8M Asbestos Verdict
The family of a Boston letter carrier, who was exposed to asbestos in high school, is awarded $6.8M in a Massachusetts mesothelioma trial – Waters Kraus & Paul (Peter Kraus and Chris Johnson) and Thornton Law Firm tried the case on behalf of plaintiffs… READ MORE

We welcomed the following new attorneys to our firm this year:

We received the following honors and recognition: