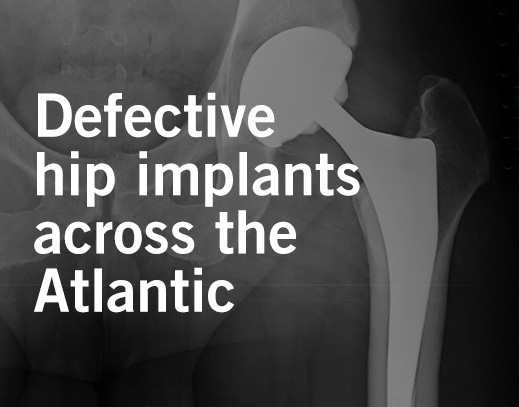 Seven hundred Britains have filed a massive metal-on-metal hip implant lawsuit against three makers of the dangerously defective implants. The defendants in the case reportedly include: Zimmer, which made the Durom cup implant; DePuy, the Johnson & Johnson subsidiary that made the Pinnacle system; and Corin, which manufactured the Cormet hip replacement system. Metal-on-metal hip implants were promoted as lasting longer than more traditional systems – at least ten to fifteen years.

The reality for many Waters Kraus &amp; Paul clients, however, is that the defective hip replacement systems cause crippling pain. Other injuries include loss of muscle and bone mass, metal poisoning, allergic reactions, and non-cancerous tumors. Many people are forced to endure additional surgery to replace the hip replacement and then wind up in a wheelchair anyway.

Zimmer’s own internal memoranda reveal that the company was focused on competing with other total hip replacement makers in the U.S. that were already selling large-head metal-on-metal hip implant systems. For American patients implanted with the defective Zimmer total hip replacement system, the widespread tragedy was inevitable, given Zimmer’s repeated choices to ignore, downplay and hide important safety issues with the Durom cup.

Before the product was released in the United States, British surgeon Dr. Paul Roberts was worried about Zimmer’s decision not to test the product adequately. Dr. Roberts originally designed the Durom Hip Resurfacing System for use in Europe. The U.S. version of the Durom cup had a new, more porous plasma spray coating than the European device. Though Dr. Roberts demanded that the new coating be tested thoroughly, Zimmer chose not to delay releasing its hip replacement system. Instead, Zimmer decided to rush the system to market.

Gibbs Henderson, Waters Kraus & Paul partner in the firm’s Dallas office, has uncovered evidence that Zimmer’s decision not to conduct the testing that Dr. Roberts and others insisted upon was just one in a continuing series of choices that led to horrific injuries for many of the firm’s clients. What were those dangerous choices?

Contact Waters Kraus & Paul by email or call us at 800.226.9880 to learn how we can assist you with a metal-on- metal hip replacement lawsuit or claim.