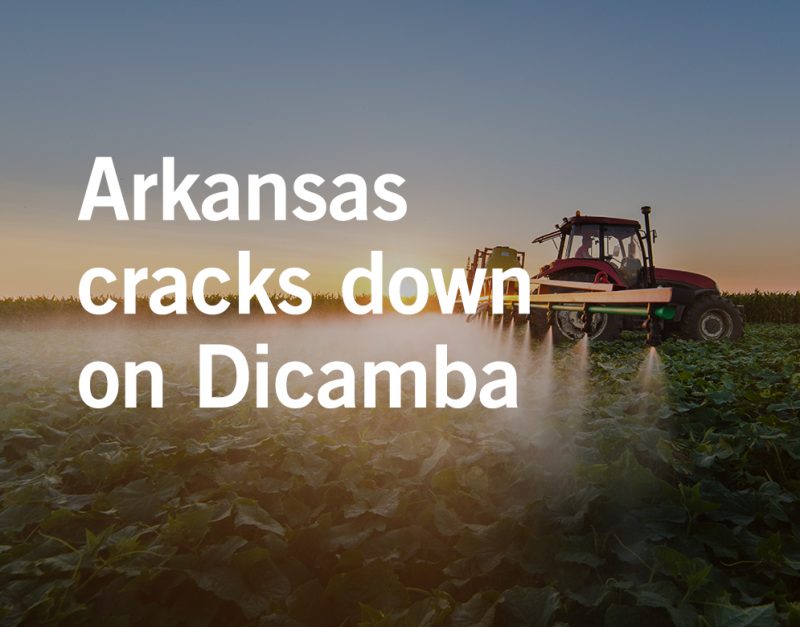 A state committee creates the toughest regulations in the country against the pesticide wreaking havoc on almost everything it touches.

The Arkansas State Plant Board (ASPB), which regulates the use of pesticides in Arkansas, has banned Monsanto’s newest pesticide: dicamba, during the warm growing season.

Dicamba is a pesticide that kills broadleaf plants. In general, this group of plants includes various shrubs, hedges, trees, weeds, and soybeans. However, Monsanto altered the DNA of some of the soybeans at issue in Arkansas. These altered soybeans are grown from genetically modified seeds and are thus considered genetically modified organisms (GMOs). As a result, dicamba does not affect the GMO soybeans. When farmers spray the pesticide in the fields where these soybeans grow, the weeds die, but the soybeans continue to grow.

The problem is that when the weather gets warmer, dicamba does not stay contained in its sprayed area. It evaporates and floats into other nearby fields growing conventional and organic crops that have not been created to withstand dicamba. The pesticide can be carried more than a mile away from where it was originally sprayed. This is a phenomenon known as pesticide drift. Local farmers say that this floating dicamba is destructive to “backyard tomatoes, melons, and orchards.” As such, the ASPB created the toughest restrictions in the country. The board members decided that dicamba could not be adequately controlled during the warmer months and banned spraying the pesticide during the entire growing season from April 15 through October. In addition, dicamba is a restricted-use pesticide. This means that anyone who uses it will need special training or supervision and a certification that complies with the Environmental Protection Agency (EPA) standards.

As dicamba drifts through the air leaving shriveled plants, it begs the questions, what is it doing to the farmworkers who may be exposed? Pesticides contain chemicals that can cause birth defects in children whose parents were exposed through commercial agricultural work, groundwater contamination, or airborne drift. Parents who work in the commercial growing industry and agricultural professions are at high risk of pesticide exposure. Such exposures in adults may lead to chromosomal damage which can be passed to their children. This can possibly result in the children enduring brain cancers, endocrine disruption, neurological disorders, lower birth weight and size, and premature death.

Waters Kraus & Paul Goes After Those Responsible for Toxic Exposure

Farm owners and labor contractors are responsible for providing a safe work environment for their farm workers, but they often fail to warn and protect their workers from pesticide dangers. Waters Kraus & Paul is a mid-sized plaintiffs’ litigation firm fighting for the justice that farm workers who have had a child with a birth defect related to toxic exposure deserve. The birth defect attorneys of the firm have years of experience aggressively representing their clients to ensure they receive compensation for their injuries, and that the negligent labor contractors and farm owners are held responsible. If you have had a child born with birth defects related to toxic exposure while working on a farm, email or call 800.226.9880 to see how the birth defect attorneys at Waters Kraus & Paul can help you with your birth defect lawsuit.