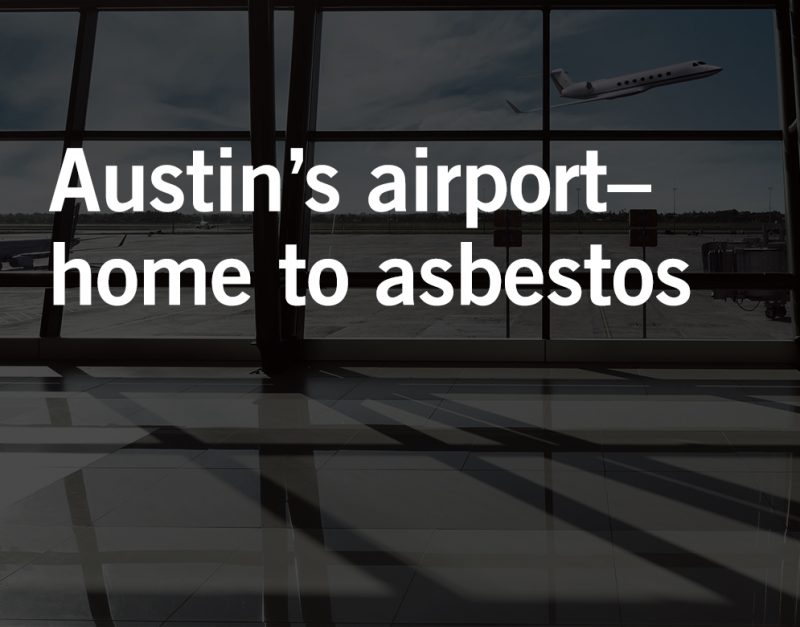 Renovations to Austin Airport Offices Exposed More than a Hundred Employees to Asbestos, Despite Prior Notice to Management of Possible Asbestos Contamination

About 120 employees in Austin-Bergstrom International Airport’s Maintenance Complex Building have been exposed to asbestos – the result of office renovations in 2016 that went forward despite employees voicing concerns over the presence of asbestos.

During renovations to the offices at the Austin, Texas, airport, a few employees noticed that black mastic, an industrial adhesive known to contain asbestos, was exposed after carpet and tile were ripped up. The employees, who had worked in the construction industry, were familiar with black mastic and knew it could be dangerous. They raised their concerns with management but renovation was allowed to continue anyway.

Although the 2004 survey that the Department of Aviation relied on to begin renovations did not show asbestos in the work areas, retesting in 2016 did show the presence of asbestos. As a result, Austin-Bergstrom International Airport has notified about 120 employees of their exposure to asbestos, and has encouraged them to fill out medical surveys. The eight city employees who were conducting the carpet renovations have been provided medical surveillance for life due to their concentrated exposure to asbestos during the renovations.

Asbestos is a naturally-occurring fibrous mineral. Asbestos was extremely popular in construction and manufacturing prior to the 1980s because of its insulating and fire-retardant properties. However, as early as the 1930s, corporations who used asbestos were aware of the deadly diseases it could cause. Asbestos fibers, when inhaled, can cause diseases like pleural mesothelioma and lung cancer.

Asbestos diseases have a very long latency period. For example, pleural mesothelioma is typically not diagnosed until several decades after initial exposure. As a result, many people who were exposed to asbestos-containing products decades ago have only recently begun showing symptoms. Not everyone who is exposed to asbestos will get sick. For the construction workers involved with the airport renovation, it is now a wait-and-see game. However, early detection through medical monitoring can be key. It may increase the availability of more life-extending treatment options for any of the workers who contract pleural mesothelioma or another asbestos disease later on.

As public awareness of the dangers of asbestos increased in the last century, so too did the regulation of products that contained asbestos. While asbestos is still not completely banned in the U.S., by the early 1980s asbestos was heavily regulated. However, exposure to asbestos is still occurring today. Many homes and buildings built prior to the 1980s were built with asbestos products. These structures contain asbestos that was left in place years ago – exposure to this asbestos can still be deadly if the asbestos-containing products are disturbed and the fibers become airborne. A big problem with these kinds of structures is that they are not always marked as a hazard.

Although corporations were aware of the dangers of asbestos by the early part of the 20th century, many failed to properly warn or protect workers. As a result of the long latency period, some people are only now being diagnosed with asbestos diseases, such as pleural mesothelioma.

Waters Kraus & Paul is a mid-sized plaintiffs’ firm with many years of experience dealing with asbestos claims. Our asbestos attorneys are fighting to hold corporations responsible for their negligent practices that caused workers to be exposed to asbestos. Email or call 800.226.9880 to see how Waters Kraus & Paul can help you hold corporations responsible for the injuries they have caused.