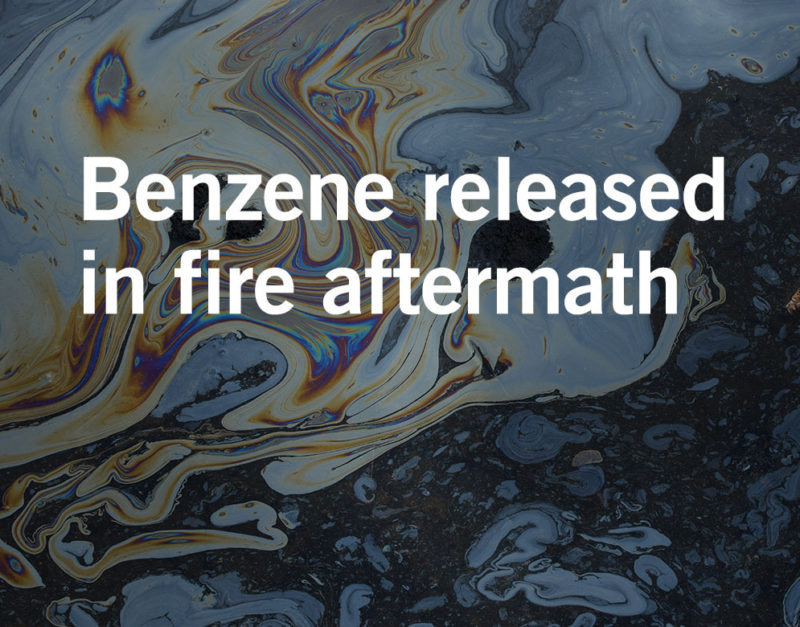 In recent years, promises to rebuild burned houses and ruined towns have become frequent in the United States. It is a natural reaction to the increasing wildfires that threaten entire communities around the country, particularly those in western states. While every displaced neighbor returning to their home following such a catastrophe hopes that the town will remain safe, experts now warn that the initial wildfires are not the only hurdle residents face. According to a study published in July 2020, harmful toxins released following a fire, like benzene, are likely to contaminate water distribution systems.

Due to the low boiling point of many substances burned amid a wildfire, toxins like benzene are dispersed easily into the air. Eventually, they spread to water distribution systems – just as was the case in Paradise, California. After a wildfire scorched through the town in 2018, local authorities tested water samples from meters connected to burned homes. They found benzene levels in drinking water at 2,217 parts per billion – a highly lethal dose of the toxin. For reference, the scientific consensus is that benzene at 1 part per billion is dangerous over the long term, meaning individuals can develop blood-related illnesses like acute myeloid leukemia (AML) and myelodysplastic syndrome from the exposure. At 26 parts per billion, benzene is dangerous over the short term. When benzene exposure is sudden and acute like that, it can cause anything from drowsiness to death.

While the water is likely contaminated with many other volatile organic materials, the state board has recommended tests on water only look for benzene since they consider the substance to be a major flag for other contaminants. “Benzene has been the leading indicator of contamination in every case where there have been combustion products that have gotten into the water system,” says Stefan Cajina, a member of the board’s division for drinking water. However, many scientists disagree with the presumption since data shows that other carcinogenic materials can be present in distribution systems without benzene.

Paradise’s town manager, Mr. Kevin Phillips, stepped up with his team to effectively improvise water standards since the state’s own regulations appeared to be inadequate. Ad-libbing directives seem to be the case even in today’s fires. Advice for residents is often inconsistent. While the state recommends “do not use” orders when there is a contaminant in the water, most utility districts in the state issue “do not drink, do not boil” orders instead, which only seem to prevent ingestion of the water. However, scientists fear that even washing may not be safe if the water has high levels of chemicals like benzene or others.

Seek justice with the help of our experienced attorneys. Our Los Angeles, California, benzene law firm has battled corporate giants on behalf of individuals like you for 20 years, aggressively fighting to hold them responsible for dangerous chemicals and the personal injuries and cancers they cause. If you have suffered catastrophic injury caused by dangerous products, we can help.