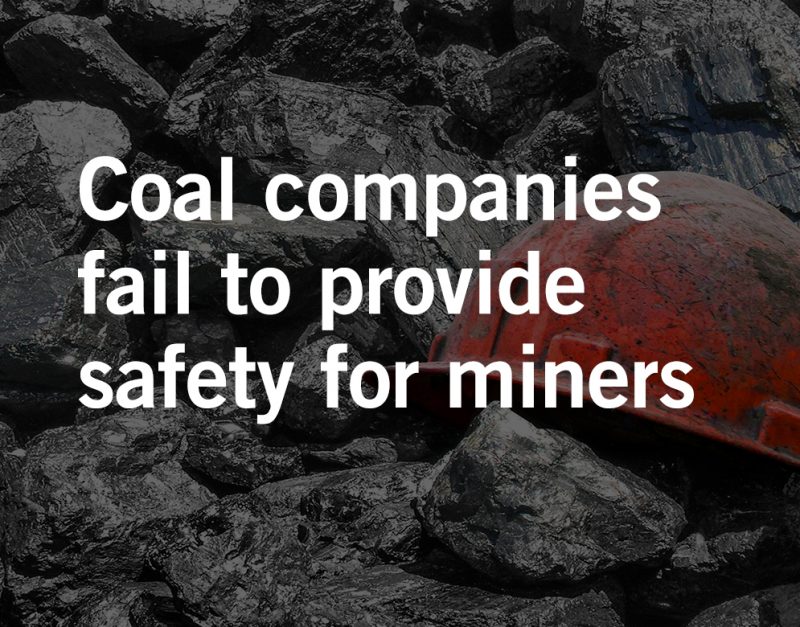 An investigation identified 2,000 cases of black lung disease, the biggest cluster of the disease ever reported, according to the National Institute for Occupational Safety and Health (NIOSH).  Conducted by NPR and the PBS program Frontline, the study revealed the extent of a grave epidemic of advanced stage black lung disease. Also known as complicated black lung or progressive massive fibrosis (PMF), the disease primarily impacts coal workers.

These cases are symptoms of a larger pattern of coal mining industry regulators and corporations ignoring safety standards and health hazards.

Complicated black lung disease is a progressive illness. It advances to a point in which pure oxygen does not help the victim. Black lung disease is caused by extended exposure to mine dust in the coalfields. Exposure can occur underground or in surface coal mines, as well as in coal processing plants. Even some coal truck drivers may be at risk for black lung.

Silica dust, another byproduct of mining, is an even larger problem than coal dust alone. Silica dust is dispersed when miners cut through sandstone and quartz to reach the coal. It is sharp enough to become trapped in the lungs forever. Silica is roughly 20 times more toxic than coal dust and can cause disease much more quickly. As coal resources get depleted, miners must cut through increasingly more rock releasing more silica dust. This greater presence of silica dust explains the increased occurrence of advanced black lung disease in younger mine workers.

Weak Regulations and Lack of Action

Since 1908, silica has been known as a health hazard in the United States. When too much silica is detected in a coal mine, regulators limit the amount of coal dust allowed in the mine. But this does not stop silica dust exposure. Regardless of citations for excessive silica levels, the industry has continued to operate, exposing 9,000 workers to unsafe levels for 30 years.

Despite the knowledge of silica dangers and recommendations made by NIOSH to enforce stricter limits on silica dust exposure back in 1974, officials were slow to address the issue. Federal regulators failed to react until the 1990s, choosing not to take direct action.

After reviewing the NPR/Frontline data, Celeste Monforton, a former mine safety regulator in the Clinton administration, says “we failed.” Ms. Monforton went on to say, “had we taken action that time, I really believe we would not be seeing the disease we’re seeing now.”

The industry has witnessed a string of lackluster regulatory decisions. The public may have cause to question the loyalties of officials who regulate the mining industry. David Zatezalo, head of the U.S. Labor Department’s Mine Safety and Health Administration (MSHA) is a prime example.

In a public appearance, Mr. Zatezalo claimed, “I believe those are silica problems…silica is something that has to be controlled.” When approached by NPR and Frontline soon after his speech, Mr. Zatezalo, who is also a former coal company executive and industry lobbyist, changed his tone. Contradicting his prior statement, Mr. Zatezalo said, “No, I said I suspect silica. I didn’t say it was. … I think until such time as you figure out what it is you don’t really know.”

Even now, MSHA, under Mr. Zatezalo’s management is making no effort to focus on stricter silica dust limits or regulations for coal mines concerning silica.

How Waters Kraus & Paul Can Help

The mid-sized plaintiffs’ firm of Waters Kraus & Paul represents many people who have been injured by exposure to toxic substances while on the job. We are dedicated to fighting for stronger controls on corporations that utilize dangerous minerals and chemicals. We work to hold employers accountable for endangering workers and the public. The experienced attorneys at Waters Kraus & Paul are tirelessly standing up to companies that put profits ahead of the safety of our clients. Email us or call 800.226.9880 to find out how the attorneys of Waters Kraus & Paul can help you hold negligent corporations responsible for the injuries they have caused you.