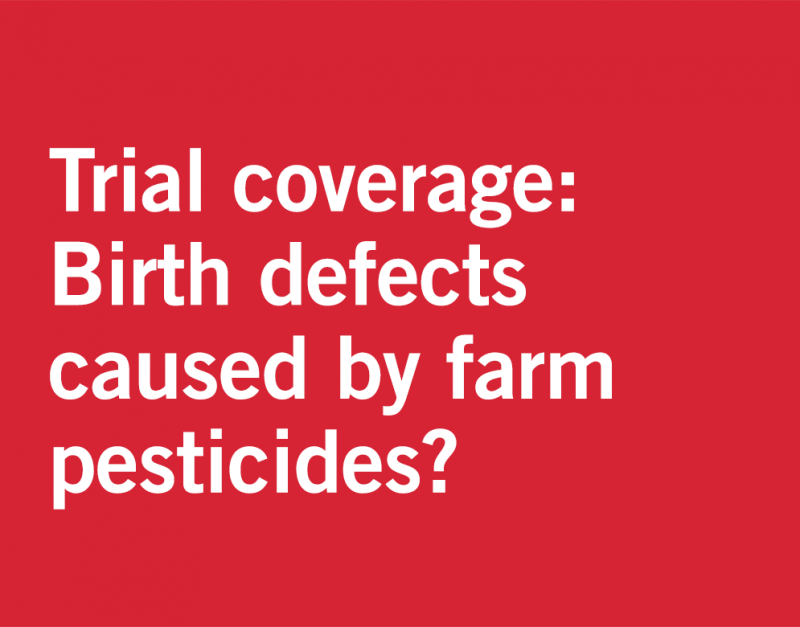 This recap pulls direct quote highlights from the paper’s stories with links to the full story.

“A 9-year-old Oxnard boy is suing several agricultural firms over serious health problems his lawyers claim he suffered in utero because his farmworker mother was exposed to pesticides in an allegedly negligent and reckless manner.”

“. . . his attorneys are attempting to prove that Erik Joe Morales was injured because he was exposed to hazardous pesticides during crucial periods of fetal growth.”

“The boy was diagnosed with hemifacial microsomia two months after his birth in November 2007. That is a condition in which the lower half of one side of the face is underdeveloped and does not grow normally, according to the National Craniofacial Association.

“A trial over claims that pesticides damaged an Oxnard boy during a critical period of fetal growth got underway Tuesday . . .”

“At issue in the case is whether the boy developed hemifacial microsomia because his pregnant mother was exposed to pesticides in 2007 while she was working at a strawberry farm in the Oxnard area.”

“ . . . the chief attorney for 9-year-old Erik Joe Morales said the firms ‘”did everything in their power’” to ensure the success of their strawberry harvest at the expense of people’s health.

“‘This is about the defendants causing this little boy very significant injuries,’ attorney David Bricker told the jury . . .”

“Defendants in a trial centering on whether pesticides caused a child’s birth defect have all denied responsibility . . .”

“At issue in the case is whether 9-year-old Erik Joe Morales developed a facial birth defect during a critical period of fetal growth because his mother was negligently exposed to pesticides when she was a harvester at a strawberry farm in the Oxnard area. The child sued four agricultural firms: Well-Pict Berries, T.T. Miyasaka Inc., Soilfume Inc. and labor contractor Ramco Enterprises.

Erik has been diagnosed with hemifacial microsomia, a condition in which the lower half of one side of the face does not grow normally. His attorney told jurors he was born with a malformed head, jaw and ear, has undergone repeated surgeries, finds it difficult to talk and eat, and has emotional, physical and learning difficulties.

The boy appeared before the jury for the first time Wednesday morning and sat quietly beside his mother, Eulalia Lopez-Gomez. His attorney, David Bricker, put an arm around him and the two walked to the jury panel.”

“Part of the case centers on whether Erik’s mother received adequate training on how to protect herself from pesticides during her employment by Ramco at the strawberry farm.”

“Bricker has portrayed the defendants as all being responsible for the child’s ‘very significant’ injuries. But in their opening statements, defense attorneys said there was no way to prove Erik’s birth defect was caused by exposure of his mother to pesticides . . .”

“Also on Wednesday, Bricker called his first expert witness, Dr. Matthew Keifer. The professor of medicine and public health at the University of Washington is expected to testify on the effect of pesticides on fetal development . . .”

“An expert witness testified in a trial Thursday that there was ample information linking pesticides with birth defects years before the birth of an Oxnard boy who sued over his condition.

A lawsuit filed on behalf of 9-year-old Erik Joe Morales claims that he developed a serious facial birth defect because his pregnant mother absorbed pesticides into her body while she was harvesting strawberries at an Oxnard farm in 2007. . The boy has been diagnosed with hemifacial microsomia, a condition in which the lower half of one side of the face does not grow normally.”

“Agricultural health specialist Dr. Matthew Keifer told jurors that more than half a dozen studies dating from the mid-1970s showed a connection between pesticides and birth defects. Parties responsible for ensuring the safety of the boy’s mother and other workers at Anacapa Berry Farms could have or should have known of the risk by 2007, he said.

‘Farmers have the responsibility to know enough to protect their workers and the children of their workers,’ said Keifer, a professor of internal medicine and public health at the University of Washington.”

“Based on his review of testimony from Erik’s mother and 20 workers, Keifer concluded that Ramco Enterprises had provided inadequate training from a federal pesticide safety guide, he said.”

“Erik’s attorney, David Bricker, said there would be testimony that harvesters had never received any training from the guide, which was developed by the U.S. Environmental Protection Agency. If true, that would be a breach of the standard of care in the industry and a violation of state and federal law, Keifer said.”

“. . . Keifer said he is an objective witness but believes some pesticides should be banned.

Some of the research was based on tests conducted on animals. Others were studies in which scientists compared the rate of birth defects in agricultural workers’ children with the rate in the general population.”

“The mother of a child suing over his birth defect was exposed to an elevated level of the pesticide Captan while working at an Oxnard-area strawberry farm, in the view of a Harvard expert who testified Tuesday at a trial.

Chensheng “Alex” Lu was the latest scientific expert plaintiff’s attorneys have called to the stand in an attempt to show that Erik Joe Morales developed a facial birth defect because his mother absorbed high levels of pesticides in 2007.

The 9-year-old Oxnard boy is suing four agricultural firms over the defect that is believed to occur during an early period of fetal development. His attorney told jurors he was born with a malformed head, jaw and ear, has undergone repeated surgeries, finds it difficult to talk and eat, and has emotional, physical and learning difficulties.

Captan has been linked with an increased risk of cancer but not birth defects on a list of chemicals maintained by the state of California under voter-approved Proposition 65 . . .”

“Lu has studied the effect of pesticides on children through several avenues: residues left on food, fetal exposure and the interaction of children with parents once they come home from their agricultural jobs.”

“Lu said he calculated the pesticide exposure for Erik’s mother, Eulalia Lopez-Gomez, by examining several sources of information. Included were records of the pesticides used at Anacapa Berry Farms on the days she worked at the site off Etting Road, payroll records, previous research on the amount of pesticides left on the skin of strawberry harvesters and a personal interview with Lopez-Gomez.

The research he examined was based on exposure of harvesters four days after the chemicals had been applied, he said. But Lopez-Gomez was working shortly after the spraying, he said.

‘She was in the field on the same day or a day or two after they applied Captan,’ said the associate professor of environmental exposure biology in the Harvard T.H. Chan School of Public Health. . ‘We know from the (scientific) literature that the residue would still be in the field.’”

Have You Been Exposed to Pesticides?
If you have a child with birth defects or cancer and you worked on a farm, contact the birth defect attorneys at Waters Kraus & Paul at 800.226.9880. We have been representing families who have suffered as a result of toxic exposure for more than twenty years. Contact us to learn how our birth defect lawyers can help you fight companies who refuse to discontinue the use of pesticides known to be harmful to children.