The EPA Disregards Its Experts, Failing to Prevent Asbestos Exposure 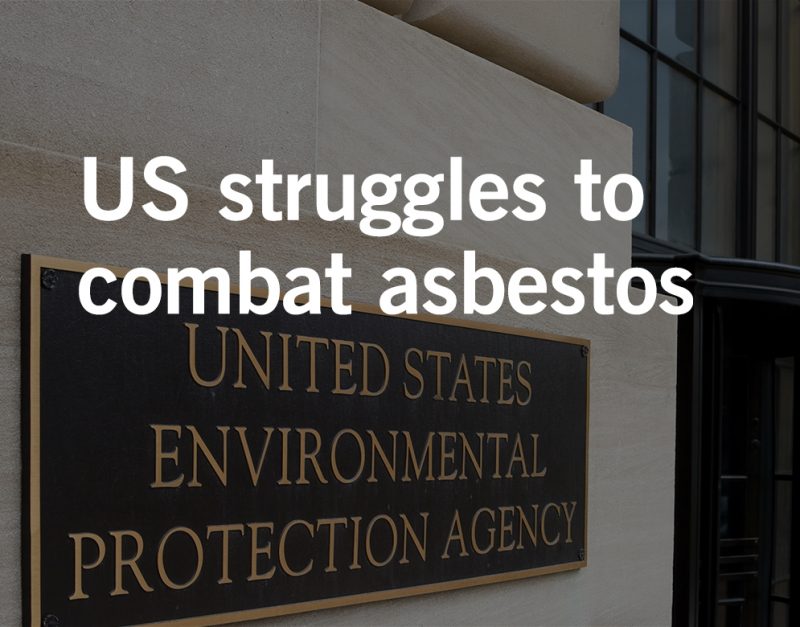 Although asbestos is currently banned in more than 60 other countries, the U.S. has failed to ban this toxic chemical and end asbestos exposure for good. The Environmental Protection Agency (EPA) did not heed the recommendations of its scientists in issuing regulations. The U.S. Congress is pushing for a ban, yet the EPA claims it must continue to evaluate the material before taking further action. Fortunately, many state legislatures are taking up the fight against asbestos exposure.

Internal memos from 2018 suggest that EPA staff members encouraged the agency to pursue a complete ban on all new uses of asbestos. It also provided adequate alternatives to replace the use of asbestos. Despite these expert suggestions, the agency simply issued new regulations which effectively allowed for new uses of the harmful carcinogen and for the return to previously banned uses. EPA Administrator Andrew Wheeler claims that the new rule provides the agency with authority to prohibit certain asbestos products from entering or re-entering the market and requires agency approval on certain products before they can be imported, produced, or sold. However, in-house experts at the EPA are skeptical of the new rule and how effective it will be at monitoring notifications of new uses of asbestos.

Currently, the U.S. Congress is considering the Alan Reinstein Ban Asbestos Now Act that would ban the use of asbestos within a year by amending the Toxic Substances Control Act. This legislation would prohibit anyone from mining, importing, using, or distributing any type of asbestos or mixtures that contain asbestos. Senator Jeff Merkley supports this legislation, stating that it is time for the U.S. to catch up with the rest of the world in terms of protecting public health. The bill was drafted in memory of Alan Reinstein, a mesothelioma victim who passed away in 2006 at the age of 66.

However, according to testimony, the EPA believes this will be premature. The agency asked for more time as it is currently conducting a review of asbestos as mandated by the TSCA. Yet, according to the memos mentioned above, intra-agency experts believe this review will be ineffective. The review is being conducted based on outdated parameters set when the TSCA was passed 30 years ago. The EPA will only consider six types of asbestos, though more have been discovered since the TSCA passed. Only lung cancer and mesothelioma will be studied as possible harmful effects of asbestos exposure. Finally, the evaluation will also completely disregard the impact of legacy asbestos and asbestos mishandling that leads to exposure, for instance, when buildings are demolished.

While the U.S. Congress works to end to asbestos exposure through an all-out ban, state governments are joining in n the fight. The attorneys general of 18 states and Washington, D.C., recently signed a letter in support of the Alan Reinstein Ban Asbestos Now Act. And 10 U.S. states and Washington, D.C. recently filed a lawsuit against the EPA seeking stronger asbestos regulations. Other states are enacting bans of their own.

In Connecticut this year, Senate Bill No. 47, “An Act Prohibiting the Sale of Goods and Use of Building Materials Containing Asbestos,” advanced to the state Senate with a unanimous vote. This legislation was introduced by Senator Matt Lesser and will build upon current restrictions on asbestos products, prohibiting anyone from introducing any item containing asbestos into commerce. The bill also forbids the sale and usage of asbestos in building or construction materials. Senator Lesser proposed this legislation to protect public health and combat the EPA’s decision not to ban asbestos products. Bill No. 47 is currently awaiting action by the state House of Representatives and a signature by the governor.

Asbestos is the commercial name for various naturally occurring fibrous minerals that can be separated into dust-like particles. If inhaled, the asbestos dust can settle and form deposits at the bottom of the lungs. Asbestos exposure can lead to life-threatening diseases such as lung cancer and mesothelioma.

Mesothelioma is an aggressive cancer that occurs when malignant cancer cells live in the sac that lines the chest, abdominal cavity, or heart. There are three types of malignant mesothelioma: epithelioid, fibrous, and mixed. Epithelioid is the most common type of mesothelioma. The average mesothelioma victim is 50 to 70 years old and male. However, women can also be victims of mesothelioma, typically caused by household asbestos exposure.

Seek justice with the help of our experienced asbestos attorneys. Our Dallas, Texas asbestos law firm has represented individuals like you affected by asbestos exposure for over 20 years, aggressively fighting the corporate giants responsible for their dangerous products. If you or a loved one were exposed to asbestos or suffer from a disease caused by asbestos like mesothelioma, we can help.