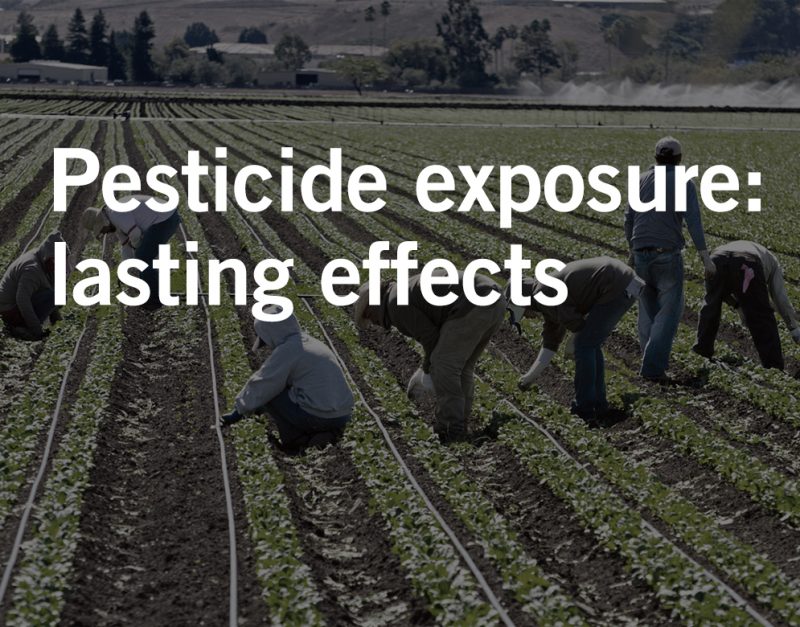 In November 2016, the U.S. Environmental Protection Agency addressed the serious dangers of the substance chlorpyrifos, a neurotoxin and popular pesticide used extensively in the agricultural farming industry. The report contains evidence that the pesticide can cause intelligence deficits and attention, memory, and motor problems in children. The findings are less than surprising to many farmworkers who were exposed to pesticides during pregnancy and are now raising special needs children. The report also states that 1- and 2-year old children risk exposures from food alone that are 14,000 percent above the level the agency believes to be safe.

Dow is a massive chemical company that patented the dangerous chemical and still makes most of the products which contain it. They dispute that their chemical, chlorpyrifos, harms children but the EPA clearly disagrees with their assessment. Estimated drinking water and non-drinking water exposures currently exceed safety standards as well.

So Why Hasn’t the EPA Banned Chlorpyrifos Yet?

One likely reason cited by farmers is the pesticide’s affordability. Because of this, the chemical is widely used to produce many of the food crops that Americans eat every day. Right now chlorpyrifos is used on more than half of all apples and broccoli sold in the United States. Farmers use between 6 million and 10 million pounds of the chemical each year on corn, soybeans, asparagus, peaches, strawberries, cauliflower, onions, walnuts, and cranberries. Products containing chlorpyrifos kill ants and combat the Asian citrus psyllid, an insect that kills fruit trees.

But at what point is the value of the chemical as a pesticide outweighed by the danger posed to farmworkers, nearby residents, and consumers? There is evidence that chlorpyrifos may also cause autism in children when their pregnant mothers are exposed to the chemical. Women exposed to pesticides during pregnancy are at particularly high risk. A 2014 study found that babies exposed to pesticides during pregnancy had a significantly increased risk of autism.  In fact, even before 2014, the shorter term dangers of the chemical were already known. Chlorpyrifos poisonings cause twitching, tremors, slurred, speech, paralysis, and even death. The annual amount of poisonings reached 7,000 in 1996.

Yet, due to the chemical lobby, the EPA has done very little to protect citizens from the dangers of chlorpyrifos. When the pesticide was first marketed, the product’s safety was emphasized, which even at that time was not true. The company seems to be content to continue marketing and selling this dangerous pesticide and to simply pay for the damage it causes. Unfortunately, no amount of money can cure a child of autism, which makes this situation all the more tragic. These women and babies exposed to pesticides during pregnancy have suffered immensely yet no-one has ever admitted any wrongdoing .

This story is depressingly familiar to the birth defect attorneys at Waters Kraus & Paul. The firm represented banana workers who were sterilized by Dow DBCP, another pesticide product. These workers were also ingesting chlorpyrifos which has put many of their children at great risk for developing autism as a result of their exposure. In that situation, EPA inaction also caused great damage to our clients because they were not adequately protected from the pesticide.