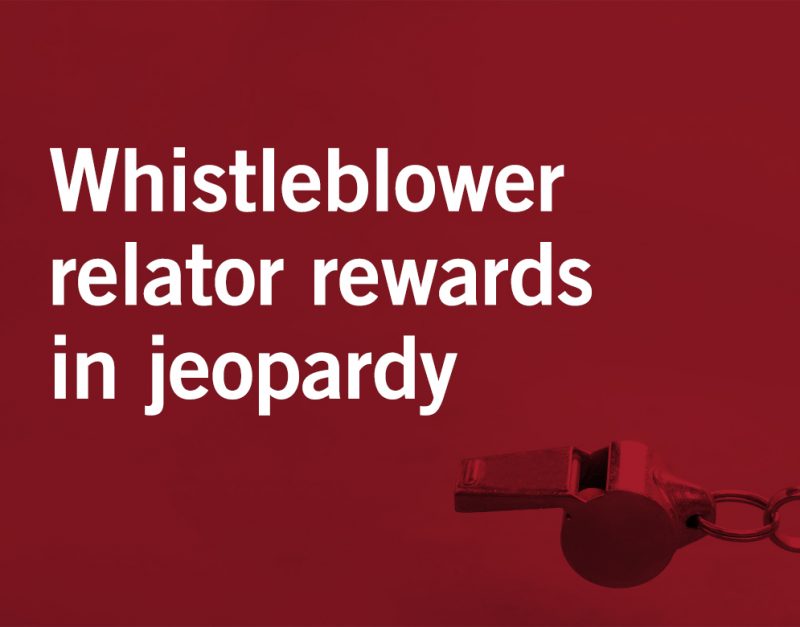 Financial CHOICE Act 2.0 Acts to Scare Off Potential Whistleblowers by Withholding Whistleblower Relator Rewards from Anyone Involved in the Fraud

The Financial CHOICE Act 2.0 could severely reduce the amount of tips the government receives about misuse of government programs and contracts. While the False Claims Act (“FCA”), under the qui tam provision, creates financial incentives for whistleblowers to provide information to the Securities and Exchange Commission (“SEC”) about companies who are defrauding governmental programs, the Financial CHOICE Act 2.0 places limits on eligibility to receive whistleblower relator rewards.

Under the proposed Financial CHOICE Act 2.0, in order for a whistleblower to collect rewards under the qui tam provision, the whistleblower must have tried to stop the fraud from occurring in their company. This would force potential whistleblowers to make a tough choice – raise the issue internally, where backlash such as being fired is a real possibility, or choose not to report the fraud at all. Raising the issue internally can create additional risks when people higher-up in the company are involved in the fraud, and will thus get an early notice of who the whistleblower is and what information they have. For this reason, it is important to have strong legislative protection for whistleblowers from retaliation, as well as competent representation by qui tam attorneys.

“Whistleblower” generally refers to the employee of the accused company who provides the SEC with information regarding the fraud. This person has “blown the whistle” on the fraud, alerting the SEC to what has happened and allowing the government to collect damages from the company that defrauded its programs.

Why are Whistleblowers Important?

Whistleblower relator rewards were created to incentivize employees to speak out against fraud, even in the face of risks. When companies discover that someone within the organization is “blowing the whistle,” there is potential for backlash. Whistleblowers could be threatened, fired, or even blacklisted from getting jobs in the future. However, the FCA provides protection for whistleblowers, allowing a cause of action for whistleblowers to receive damages and qui tam attorney’s fees from any company that retaliates against an employee who reports fraud to the SEC, or raises the issue internally.

Waters Kraus & Paul is a mid-sized plaintiff’s firm with experience in representing whistleblowers in qui tam cases. The qui tam attorneys of Waters Kraus & Paul will aggressively pursue your case to ensure that the companies engaged in defrauding the government are held responsible, and that you receive the whistleblower relator reward that you are entitled to. If you have information that your employer is defrauding the government, email us or call our qui tam attorneys at 800.226.9880.