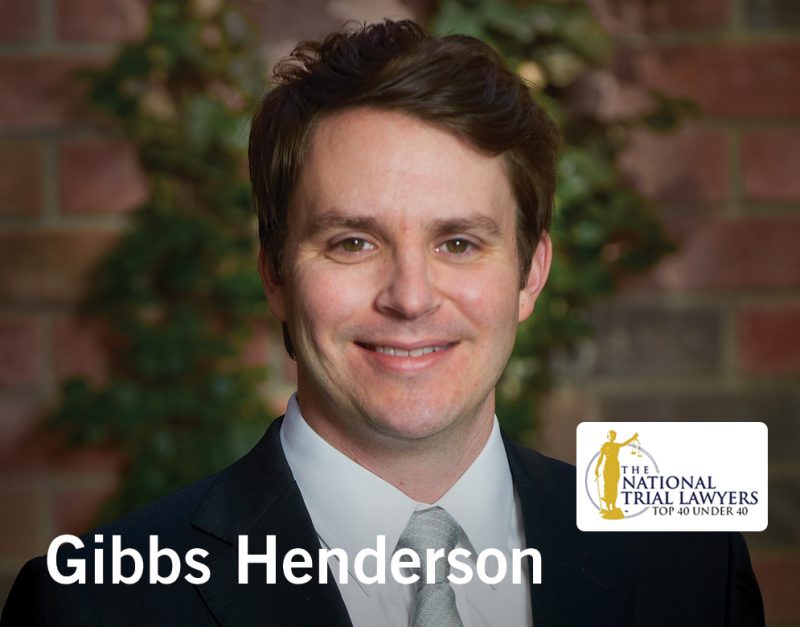 Waters Kraus & Paul partner Gibbs Henderson has been selected for invitation to membership of The National Trial Lawyers: Top 40 Under 40. According to The National Trial Lawyers, Mr. Henderson is part of an elite group of the top 40 attorneys from the state of Texas who are under the age of 40 years old and eligible for national membership in the Top 40 Under 40 organization.

Launched in 2012, The National Trial Lawyers: Top 40 Under 40 is a professional organization comprised of America’s top young trial attorneys. Membership in the group is by invitation only and is extended exclusively to those individuals who exemplify superior qualifications, trial results, and leadership as a young trial lawyer.

“I continue to be impressed by the achievements of my fellow colleagues,” said Peter Kraus, one of Waters Kraus & Paul’s founding partners. “Gibbs is a tenacious lawyer who has proved his ability time and again for his clients.” Mr. Kraus continued, “It’s one thing for us to know how fortunate we are to have such a strong young talent on our team, but to see Gibbs’ achievements recognized by this great organization is really validating.”

Members of The National Trial Lawyers: Top 40 Under 40 are carefully screened prior to receiving an invitation. The selection process for this elite honor is based on a multi-phase system focused on objective and uniformly applied criteria. Honorees are identified through the evaluation of peer nominations combined with third party research, including:

After evaluating Mr. Henderson’s qualifications, The National Trial Lawyers extended an exclusive invitation to him to be named a Top 40 Under 40 trial lawyer for his performance as an exceptional young lawyer. He has demonstrated superior qualifications, leadership skills, and trial results on behalf of plaintiffs in civil matters.

Gibbs Henderson is a practicing trial lawyer and partner at Waters Kraus & Paul in the firm’s Dallas office. Mr. Henderson joined the firm in 2008 and has been a partner for the last five years. A Texas native, Mr. Henderson was a Dean’s Scholar at the University of Texas School of Law where he was awarded his Juris Doctor degree. Mr. Henderson has successfully obtained verdicts on behalf of his clients in asbestos exposure and metal-on-metal hip implant cases. He heads up the firm’s medical device injury practice and has been recognized several times for inclusion on the Texas Super Lawyers Rising Stars list, published by Thomson Reuters.

About Waters Kraus & Paul, LLP
Waters Kraus & Paul is a national plaintiffs’ firm that tries cases on behalf of individuals across the country. We represent families in personal injury and wrongful death cases involving asbestos and benzene exposures, pharmaceuticals, and medical devices, birth defects and other childhood injuries caused by toxic chemical exposure and semiconductor chip manufacturing. We also represent whistleblowers in False Claims Act lawsuits who uncover fraud against the government. Based in Dallas, Texas, with offices in California and by appointment in Illinois, Waters Kraus & Paul has represented families from all fifty states and many foreign countries, as well as foreign governments. Contact Waters Kraus & Paul by email or phone 800.226.9880 to learn more about Mr. Henderson and how we can help you.