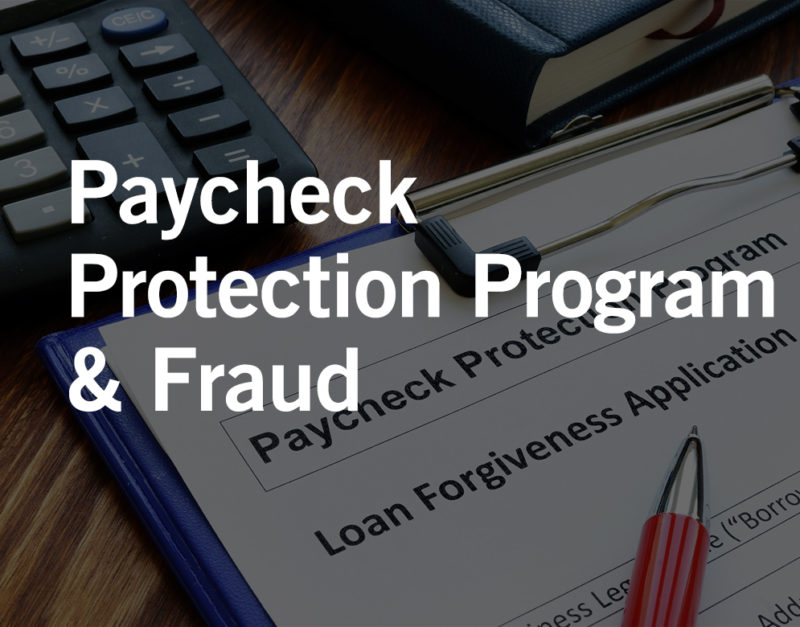 The Paycheck Protection Program, or PPP, has been a crucial lifeline that provided forgivable loans for small businesses scraping by during the pandemic as a part of the Coronavirus Aid, Relief, and Economic Security (CARES) Act. Specifically, it was meant to cover the cost of employee paychecks that would keep them employed, which also eased the burden on business owners who likely were unable to meet their overhead.

However, much of that money intended to boost those honest businesses has been fraudulently taken—not just from the hard-working taxpayers who funded the program but also from the people who desperately needed it to make ends meet.

Unfortunately, when money is involved, there are inevitably going to be failures in the honor system. That is where good legal help comes in to right those wrongs, but still, it cannot be done without whistleblowers willing to come forward.

Federal laws protect whistleblowers from retaliation by employers who defraud the PPP disbursed by the Small Business Administration (SBA). In some cases, there are even monetary rewards for turning in cases of fraud. Under the False Claims Act (FCA), the government may reward a PPP whistleblower with up to 30% of the recovered funds.

While a reward or a strong sense of honor are good enough reasons for many whistleblowers, hearing the stories of gross abuse of the program would incite anyone to action. Cases of PPP fraud range from inflating payrolls or outright inventing employees to get more funding to filing multiple fraudulent applications, sometimes for the same company and other times for businesses that did not even belong to the applicant or that did not exist. In the case of Texan Jase DePaul Gautreaux, he’s allegedly guilty of all of the above as a part of a scheme to steal $13 million from taxpayers. So far, there have been over 50 other individuals charged nationwide, and unfortunately, we expect there are more who need to be brought to justice. If those individuals had made out with as much money as Gautreaux, the rest of the country would be left with only $9 million from the $659 million initially budgeted for PPP. Thankfully that is not the case, but it illustrates why it is so important to allocate the funds evenly the way they were meant to be distributed.

Texas has the largest share of fraud cases prosecuted by the DOJ, comprising 20% of the lawsuits in the country despite the fact it did not receive the highest amount of loans. As if the number of fraud cases was not bad enough, it is how they allegedly abuse the approved funds for non-qualifying expenses and personal gain that makes the deception worse. These are the stories making headlines that have been the most offensive because they have often involved using the money on excessive luxury items like boats and cars when it was meant to save businesses from closing. Instead of showing any shame, they are accused of flaunting their crimes because they know there is not enough oversight to audit the unprecedented loan program. These headlines will not be going away anytime soon. Given the data breaches over the last decade, criminals have all the personal information needed to create seemingly legitimate identities they can use to commit fraud more easily on a larger scale. The only way to get justice is to do what these criminals cannot by going through the proper channels and taking them to court to expose their fraudulent lies with the help of honest citizens.

Seek justice on behalf of taxpayers with the help of our experienced attorneys. Our Dallas, Texas, qui tam team has battled corporate giants and individuals for 20 years, aggressively fighting to hold defendants accountable for fraud committed against the government. If you believe you have a whistleblower case, we can help.