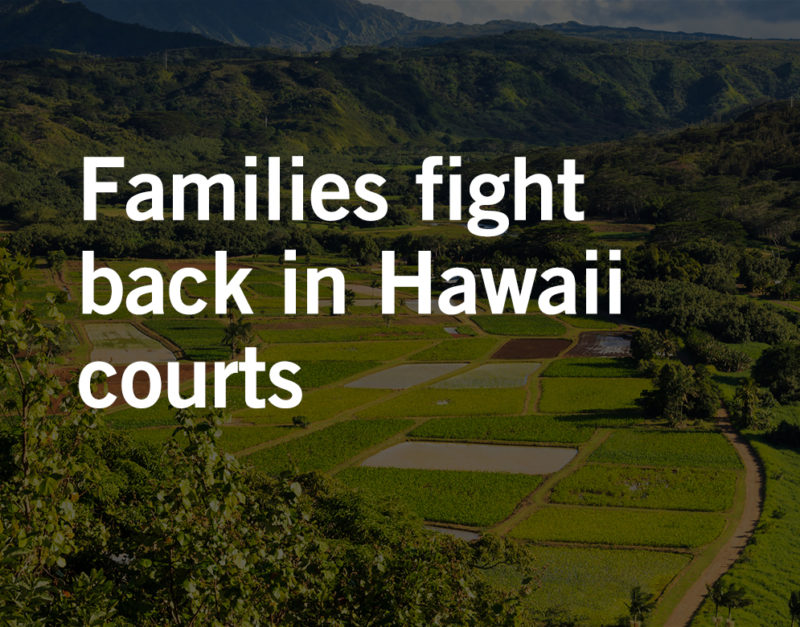 On October 24th, 2019, two Maui families filed a lawsuit against Monsanto and its parent corporation Bayer AG, alleging that the pesticides and herbicides developed by the company led to severe birth defects in their children. Living just a few hundred yards away from Monsanto’s genetically engineered seed facility in Kihei, both plaintiffs, Dana Fulton and Max Coleman, along with their families, have been exposed to pesticides for much of their lives. The case alleges that for years, Monsanto knew that such substances easily drift into nearby communities, but the company did not stop its use of chemicals on fields near residential neighborhoods. Research from the University of California, Santa Barbara, shows that living near farm fields like Monsanto’s increases the risk of birth defects caused by exposure of the mother to pesticides.

Its favorable and moderate climate has long made the state of Hawaii the preferred location for growing and testing genetically engineered (GE) crops. While modified foods like Hawaii’s papaya, can often be successful models for how GE crops can help feed the world, ‘testing’ phases in seed facilities like Kihei’s can discount such efficiency. By spraying Kihei fields with a series of toxic pesticides known as Restricted Use Pesticides (RUP) — pesticides that threaten human health and the environment — the resistance of GE crops to chemicals is assessed, but not without consequence. The increased use of pesticides and heightened rate of birth abnormalities linked to pesticide exposure has spurred some families to take their claims to court.

Waters Kraus & Paul, along with co-counsel, Galiher DeRobertis & Waxman, Thornton Law Firm, and Phillips & Paolicelli, represent the injured parties in the Monsanto lawsuit. In addition to claims against Monsanto and Bayer AG, the case also names Alexander & Baldwin as a defendant. Alexander & Baldwin is a Hawaii corporation which owned, farmed, and planted sugarcane in the Kihei fields near the plaintiff families’ residences.

The thorough evaluation of the facts in this lawsuit will shed light on company practices and their responsibility to appropriately address serious complaints like birth defects. Individuals born with abnormalities caused by pesticide exposure like Dana Fulton and Max Coleman undergo a lifetime of surgeries and medical treatments to maintain their health. This routine care certainly takes a financial, but more importantly, an emotional toll on families.

Seek justice with the help of our experienced lawyers. Our pesticide law firm has battled corporate giants on behalf of individuals like you for 20 years, aggressively fighting to hold them responsible for dangerous chemicals and the birth defects and personal injuries they cause. If you have a child with birth defects caused by dangerous products, we can help.