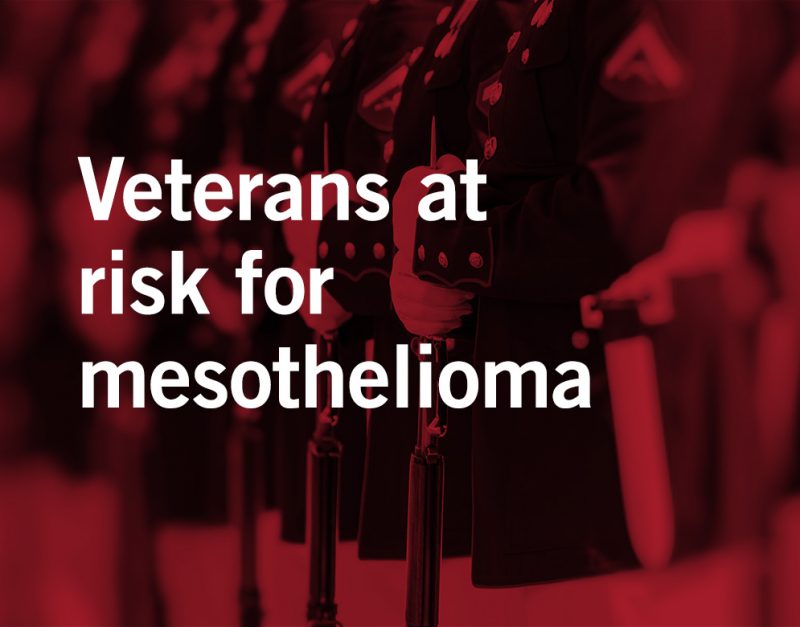 November 11, 1918, marked the end of World War I and, in 1938, November 11 became an official holiday in the United States: Veterans Day. Now, each year on this day, we celebrate the brave men and women who sacrificed their lives in the United States armed forces. Many Louisianans use the Veterans Day holiday to visit the graves of fallen soldiers and honor those who continue to fight for our country. The displays of flags and flowers are a testament to the gratitude we as a country feel for our veterans.

Unfortunately, thousands of veterans are losing their lives not to wars and conflicts, but to asbestos exposure that occurred while they served. Mesothelioma is one of the most common diseases among military veterans—but former servicemen and women who become diagnosed aren’t always easily able to get access to the health care and compensation they are entitled to as former members of the military. That is where experienced mesothelioma attorneys come in. Those diagnosed with this fatal illness caused by asbestos exposure can receive justice for their cancer.

Military History of Asbestos in Louisiana

Asbestos is a fibrous mineral widely used in a variety of products and industries for its fire-retardant qualities. Unfortunately, it is also the only known cause of the deadly cancer mesothelioma. When these fibers are inhaled, they work into the pleural lining, a thin membrane that lines the lungs and the chest wall. Over time, asbestos fibers can cause irritation, inflammation, and genetic changes in the lungs, leading to this rare cancer.

Approximately 3,000 cases of mesothelioma are diagnosed in the United States each year, and nearly one-third of these are veterans. As a point of comparison, veterans comprise approximately 7% of the U.S. population. Ill effects of asbestos exposure were reported in the early 1900s, but corporations minimized the risks to meet demand for products with the cost-effective flame resistance only asbestos could offer at the time.

Asbestos was widely used in the military in vehicles, weapons systems, ships, and even military housing. Our own Coast Guard base in New Orleans is no exception, with many ships coming in and out and housing constructed before the asbestos ban or abatement procedures. However, by the 1970s, overwhelming scientific evidence of asbestos-related disease led the public to demand restrictions on its use. At this time, the military prohibited the use of asbestos in new construction. Still, asbestos remained in existing buildings, and it took years to phase it out to minimize the risk to service members. The military estimates that service members from 1930 to 1980 are at the highest risk of complications from asbestos exposure. Those who served after 1980 also may be at risk from asbestos that the military left in place and asbestos they may have been exposed to in other countries.

When these long years of exposure are considered along with the decades-long incubation period for pleural mesothelioma, it is easy to see why veterans are still being diagnosed with new cases at a staggering rate compared to the general population.

How We Help Louisiana Mesothelioma Victims

Seek justice with the help of our experienced mesothelioma attorneys. Our Louisiana asbestos law firm has represented individuals like you affected by asbestos exposure for over 20 years, aggressively fighting the corporate giants responsible for their dangerous products. If you or a loved one were exposed to asbestos or suffer from a disease caused by asbestos like mesothelioma, we can help. Contact us to discuss your case.