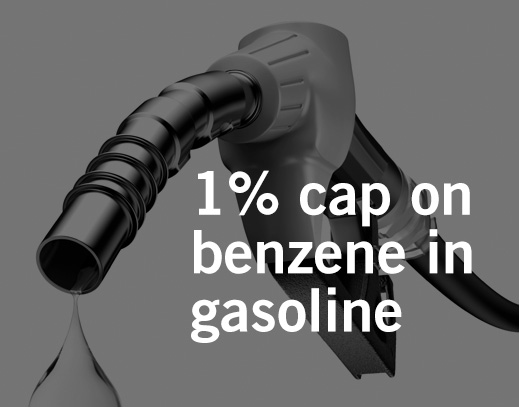 Indonesia has ordered oil companies to reduce benzene levels in gasoline sold in that country. The new lower limits will go into effect in July 2017. Indonesia’s National Environment Agency (NEA) reportedly has decided that gasoline sold there may not contain more than one percent benzene.

Indonesia’s new benzene cap is the first the country has ever imposed. Benzene is a highly toxic substance known to cause a number of health problems, including acute myeloid leukemia (AML) and myelodysplastic syndrome (MDS). Benzene in gasoline products sold in Indonesia is currently not regulated at all. The NEA has given the oil companies 18 months to comply with the new rules.

After oil companies were required to remove lead from gasoline products, they began to rely on benzene instead to help gasoline ignite in the engine. Benzene content in gasoline sold in Indonesia today varies from one to five percent. The higher the octane levels, the higher the benzene content.

Environmental regulators believe that the new cap will remove hazardous emissions from more than 6.5 million gallons of benzene that Indonesians consume annually. Benzene is a dangerous pollutant that is extremely harmful for air quality. The reduced emissions will benefit everyone in the country. Gas pump attendants will also receive lower exposures to the known carcinogen. In the United States, too, those who work directly with gasoline products are at a particularly high risk for benzene exposure.

Shell Oil claims that all of its gasoline currently sold in Indonesia contains less than three percent benzene. According to ExxonMobil, the benzene levels in its gasoline are already below the new one percent cap.

The lawyers at Waters Kraus & Paul have been representing people sickened by toxic exposures for more than twenty years. Have you or a loved one been exposed to benzene and diagnosed with acute myeloid leukemia or myelodysplastic syndrome? If so, call us at 800.226.9880 to speak with our benzene attorneys, like Scott Frost and Joy Sparling in our Los Angeles office, to learn more about how we can assist you with a benzene lawsuit.