The Industrial History of Asbestos: When Did They Learn It Was Toxic? 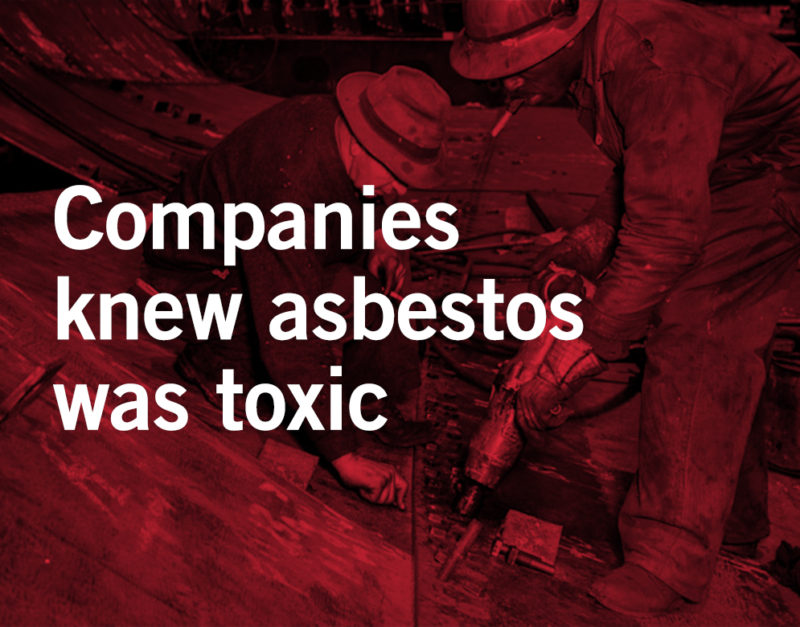 In 1924, the first medical article on the hazards of asbestos was published in the British Medical Journal, a prestigious outlet for scientific research. The studies that followed eventually linked the naturally occurring silicate mineral to the most widespread occupational cancer in the world, mesothelioma.

Though the dangers of asbestos are widely recognized today by doctors and researchers, many companies hid the dangers and knowingly exposed workers to asbestos for decades. Several years’ worth of internal documents reveal how multiple corporations contributed to asbestos coverups, ultimately resulting in the illness and death of countless individuals.

Known for its insulating and fire-retardant properties, asbestos has long been a staple in many industrial and construction products. It was also used in shipyards and aboard U.S. naval ships. The mineral’s fibers produce a fine dust. When inhaled, the asbestos fibers form deposits in the lungs. The deposits may cause cancers like mesothelioma or other diseases like asbestosis. Cancers caused by asbestos fibers are often diagnosed decades after the initial exposure due to the fibers’ ‘Hidden Killer’ properties. They are too small to see and have no warning signs like smell or taste.

Though several agencies have declared that any asbestos exposure is very serious and that there is no “safe” level of contact, it has not stopped companies that have been historically aware of its potentially fatal consequences from continuing to use it or keep it in their facilities.

By 1931, the British government began regulating asbestos dust in its factories. By the time of the Second World War, corporations like ASARCO, a mining, smelting and refining company based in Arizona, and Exxon, the multinational oil and gas extractor headquartered in Texas, were ramping up production for the war effort, even though they knew asbestos permanently damaged the lungs and led to fatal diseases. Millions of workers were exposed to the toxic mineral with virtually no health protection. Confidential statements from the mid-1900s, which have since been released, were written by directors and CEOs of such companies acknowledging the dangers workers faced from inhaling asbestos dust. By the late 1970s, the threat of asbestos exposure was so apparent that even the insurance industry was deeply concerned about its financial vulnerability. The American Insurance Association predicted the likelihood that thousands upon thousands of rightful asbestos claims would be filed between 1977 through 1995.

As executives from the Asbestos Information Association stated in 1973, the medical literature that asbestos victims rely on to justify their claims, is “full of solid evidence linking asbestos to disease.” Company doctors, like those from Union Carbide, have also referenced an overwhelming amount of government studies indicating that asbestos exposure “as short as one day” is able to produce  a lung disease. Though the corporate giants were never fully able to refute scientific facts that declared asbestos a carcinogen to humans, the obvious financial burden caused by this information never stopped them from trying to hide it.

When word began to trickle out to consumers and the mainstream media on the appalling hazards of asbestos, controlling information flow became a top priority for the industry. Some companies concealed medical documents and research that may have promoted stricter asbestos regulations and safe work practices. Other companies, like Philip Carey Manufacturing, quickly fired doctors who submitted reports on the health hazards of asbestos and asked that companies reevaluate their health and safety guidelines.

These attempts to dismiss a devastating health threat like asbestos exposure did not go on for long. Since the early 1980s, many companies that mined, manufactured, and used asbestos have been held to account in the courtroom. Initial plaintiffs diagnosed with mesothelioma were miners and workers in the asbestos industry. Later however, carpenters, electricians, and others working around asbestos containing materials followed seeking help from asbestos attorneys and mesothelioma trial lawyers.

Asbestos affected a wide range of industries and professions. Many companies knowingly exposed their workers to asbestos for decades. Once the danger became widely known, it was clear these companies needed to use alternative products and protect their workers. This resulted in a dramatic reduction in asbestos use and increased regulations.