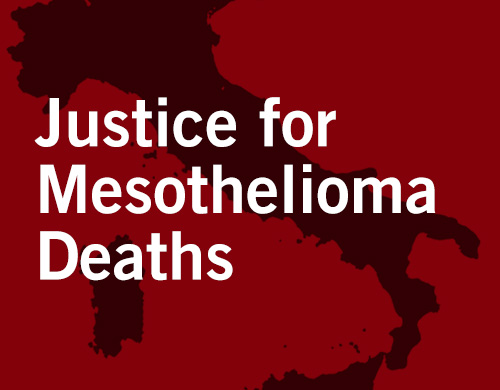 Most mesothelioma asbestos lawsuits in the United States do not end with a criminal conviction and jail sentence for those found to be responsible. Things recently went very differently for former company officials with Italian electronics company Olivetti. Several company managers were sentenced to prison in connection with the mesothelioma deaths of ten factory workers exposed to asbestos in the company’s Ivrea plant in the northwest region of the country. In addition, the court sentenced the managers as well as the company (now Telecom Italia) to pay $2.2 billion in partial compensation to the families of those killed. “The case sends a strong message to company managers willing to look the other way when workers are at risk for developing a fatal cancer, like mesothelioma, as a result of asbestos exposure on the job,” saysWaters Kraus & Paul founding partner Peter Kraus, licensed to practice in Texas, California, Virginia, and Missouri.

Laura Longo, the Italian prosecutor in the case, reportedly charged that the mesothelioma deaths could have been prevented had Olivetti not chosen to continue using asbestos until mid-1990. According to Waters Kraus & Paul asbestos lawyer Michael Armitage, licensed in California and Louisiana, it was well known by that time that asbestos exposure causes mesothelioma, and in fact had been understood for decades.

One of three major mesothelioma asbestos lawsuits to be tried recently in Italy, the case was brought against 17 former Olivetti managers who all stood trial for manslaughter and culpable injuries involving the deaths of 14 plant workers employed between 1970 and 1990. Italian prosecutors began investigating the case in 2013. The trial began in January 2016. Along with the De Benedetti brothers, 12 other former managers were found guilty on various charges. Prosecutors charged that the managers’ actions resulted in a lack of adequate security measures in the Olivetti factory that allowed workers to be exposed to asbestos, a toxic substance known to cause asbestos cancer and mesothelioma.

Two other mesothelioma asbestos lawsuits have also come to trial in Italy in recent years. In 2015, eleven former managers at Pirelli, an Italian tire manufacturer, were convicted of manslaughter in connection with the deaths of 24 plant employees who died of mesothelioma after exposure to asbestos on the job. And in 2013, the former owner of Eternit, an Italian construction company, was sentenced in a case that involved the deaths of more than 2,200 people exposed to asbestos dust released into the environment by Eternit facilities.