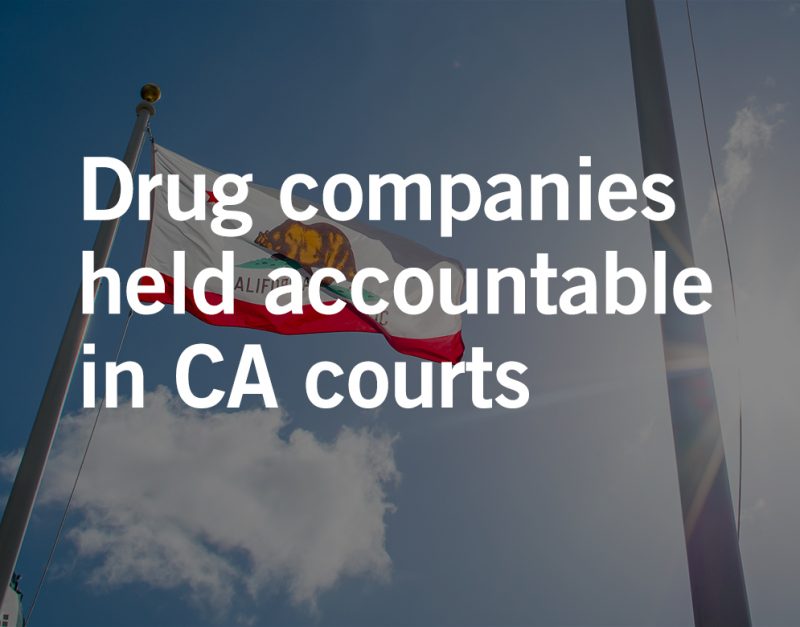 When “Big Business” puts profits over safety, and current regulations are not enough, the civil justice system is often the last line of consumer protection. If you follow a product’s usage label and it makes you sick or injured, common sense would lead you to believe that the manufacturer who created the label should be held responsible. However, after the California Supreme Court ruled just that, the American Tort Reform Foundation called California “Judicial Hellhole #1.” We don’t really follow the logic.

In a blog post by Arthur Bryant and Leslie Brueckner, Public Justice addresses the American Tort Reform Foundation (ATRF) and the nonsensical campaign they are promoting that highlights what they refer to as the top “judicial hellholes.” The post describes ATRF’s propaganda as “the best legal joke of the year.” The idea that a court could be considered a “hellhole” for holding companies accountable for prioritizing profits over people is so absurd that it’s comical. ATRF is backed by large corporations and is largely supported by the tobacco, insurance, chemical, auto, and pharmaceutical industries. It works to weaken laws regulating corporate business practices and to limit the public’s access to justice. While the ATRF feels that holding manufacturers accountable is their version of “hell,” the California Supreme Court, as well as plaintiffs’ attorneys, and consumer advocates, believe that if you follow a product’s usage label and end up sick, the manufacturer should be held responsible.

In 2017, twin siblings sued a brand-name drug manufacturer, seeking justice for the brain damage they suffered as a result of one of the manufacturer’s medications. According to the ATRF, the Supreme Court’s decision in T.H. v. Novartis landed California as “Judicial Hellhole #1.” The defendant in the case, Novartis, was the manufacturer of a brand-name drug called “Brethine.” The mother of the twins took the generic version of “Brethine” during her pregnancy, which caused the twins to suffer brain damage in utero. The twins filed suit against Novartis because federal law requires generic drug manufacturers to use the brand-name product label, protecting generic drug manufacturers from being sued. Novartis knew that their drug and the generic versions could cause fetal brain damage but did not include any information on the label to warn pregnant women of that risk. After establishing that Novartis knew that the generic manufacturers were required to use their label and that the label was inadequate, the California Supreme Court ruled in favor of the twins.

The ATRF promotes their annual “Judicial Hellholes” list, drawing attention to certain jurisdictions and civil court judges they believe are “unfair” in the way they apply the law. The ATRF describes the list as the nation’s “most unfair” jurisdictions in terms of handling litigation. But really, these jurisdictions are examples of fair legal systems that allow injured people to stand up to large corporations and seek justice for their injuries.

The ATRF placed St. Louis, Missouri, fourth on their list based on the city’s ability to attract out-of-state plaintiffs. Their reasoning focused on Johnson & Johnson and the talc litigation that resulted in 22 ovarian cancer victims and their families receiving a total jury award of $550 million in actual damages and $4.14 billion in punitive damages. Because the claims in each case were similar they were joined, allowing the cases to be tried before one judge. Five of the plaintiffs involved had a connection to Missouri, which is known for setting trial dates quickly. This means dying plaintiffs have a better opportunity to see their day in court.

Louisiana is ranked fifth on the ATRF list, partly for hiring plaintiffs’ firms to represent the Department of Health in opioid litigation. The ATRF criticized the state, claiming that the opioid epidemic should be addressed by policymakers, scientific communities, and law enforcement alone. By taking this position, they are ignoring the state’s interest in protecting its citizens who have been affected by the epidemic and depriving those victims of being fairly represented by someone to protect their individual interests.

The jurisdictions and decisions on this list are important, but not for the reasons that landed them there. The ATRF is afraid of being held responsible for its members’ bad acts.  In truth, the focus should be on the plaintiffs and raising the availability of legal recourse for injured people seeking recovery. To the ATRF, these jurisdictions are viewed as “hell,” but to the plaintiffs impacted in these areas, the decisions on this list are their saving grace.

While large organizations like the ATRF protect their funding industries, plaintiffs’ attorneys stand up for the little guy – the people who are injured. Plaintiffs’ attorneys are a source of support and guidance for the people they represent, and those people have a right to seek justice in the courts for harm they have suffered.

How Do We Fight Corporate Negligence?

Seek justice with the help of our experienced attorneys. We’ve battled corporate giants on behalf of individuals like you for 20 years, aggressively fighting those responsible for personal injury and wrongful death caused by corporate wrongdoing and fraud committed against the government. If you’ve suffered catastrophic injury or loss caused by corporate negligence or believe you have a government whistleblower case, we can help. Contact is kept confidential.