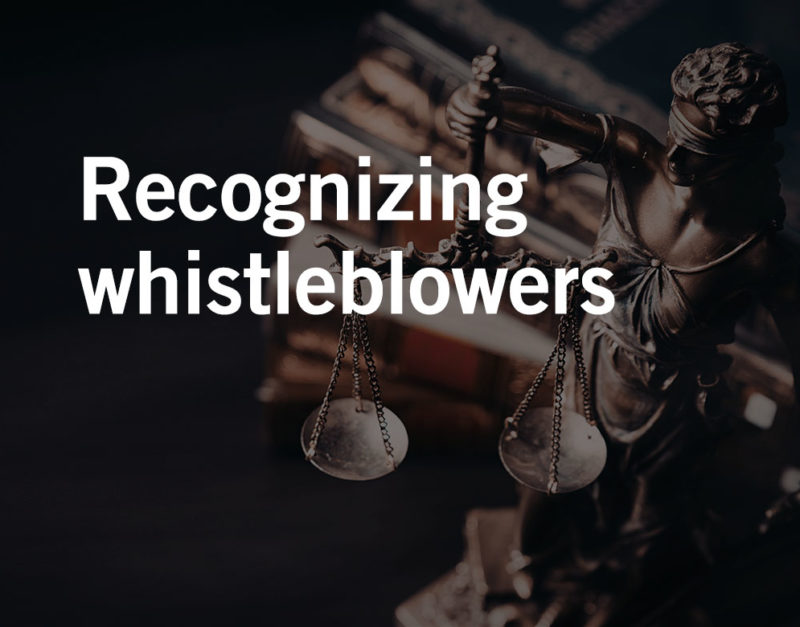 Transparency has long been seen as an essential virtue in democracies like our own. Where there is openness, there is accountability and trust. But in the instances when companies and various entities within our nation have failed to operate under the sincerity of the law, honest individuals have bravely stepped up to guarantee justice. That is why three years ago, the U.S. Senate unanimously passed a resolution marking July 30th as a commemorative day to recognize whistleblowers whose actions have protected Americans from fraud and misconduct.

The Importance of Whistleblowing During a Pandemic

This year, National Whistleblower Appreciation Day conveys much deeper significance. In the wake of the COVID-19 pandemic, former president Donald Trump signed into law the Coronavirus Aid, relief, and Economic Security (CARES) Act, a $2 trillion stimulus package — the largest in American history —that made available hundreds of billions of dollars in loans and other financial assistance to distressed companies. With the passing of such an enormous bill, false claims and fraudulent activities would inevitably find a foothold. Such fraud only makes it harder to fight COVID-19, as it delays effective response, and wastes taxpayer’s money.

The past year has proven that whistleblowers serve as the crucial first line of defense to reveal and combat fraud. The Small Business Administration’s Office of Inspector General has received nearly 150,000 tips regarding potential fraud, according to the agency’s March 2021 analysis. Whistleblowers have helped to maintain order and ensure that funds from government relief programs go to those who deserve them in several states, including Florida, Texas, and Washington. Other misconduct during the pandemic has appeared in the form of schemes made to mislead investors and manipulate stock prices. For instance, the president of a California-based medical technology company, Mark Schena, was recently charged for allegedly “defrauding Medicare through illegal kickbacks and bribes, and fraudulently promoting an unproven COVID-19 test to the market”. By filing suit against Schena, the unknown complainant has essentially encouraged the preservation and recovery of precious taxpayer dollars.

Through the conditions made possible by the pandemic, whistleblowers have revealed the weaknesses and dramatic faults common in our society, ones that have existed long before any universal health crisis. That is why this year, recognition of such unnamed heroes should not be limited to one passing day, but it must be a normalized celebration of the astounding integrity of whistleblowers, and the courage of our firm’s qui tam clients.

The FCA Was Created to Aid During a National Crisis

Widespread fraud during an ongoing national crisis is not a new phenomenon. In fact, the False Claims Act (FCA) was enacted by Congress in 1863, at the height of the Civil War. At the time, profiteers used the crisis of war to defraud the nation – eventually enabling the passing of a law that would give the average American the ability to file actions on behalf of the government, and to help justice reach places it would not otherwise. Today, whistleblowing is publicly considered a civic duty that often rights serious wrongs, but it is not without consequences.

While whistleblower protections do exist under the False Claims Act (FCA), corporations have increasingly developed internal protocols that all too often fail whistleblowers who put their jobs on the line to expose misconduct. This is where qui tam whistleblower attorneys come in. In the instance that corporate fraud manages to continue despite an individual’s effort to disclose sensitive information, reaching out for legal action should be the next step in fighting such crime. When filing a whistleblower claim, timing is critical, and it may determine whether someone is eligible for a reward from the government for reporting fraud.

Knowing this, the burden of speaking out should not silently fall on whistleblowers. Our collective awareness of the misconduct that has and can take place is just as important in ensuring that fraudulence does not persist.

Seek justice on behalf of taxpayers confidentially with the help of our experienced attorneys. Our Dallas, Texas, qui tam law firm has battled corporate giants on behalf of taxpayers like you for 20 years, aggressively fighting to hold companies accountable for fraud committed against the government. If you believe you have a government whistleblower case, we can help.