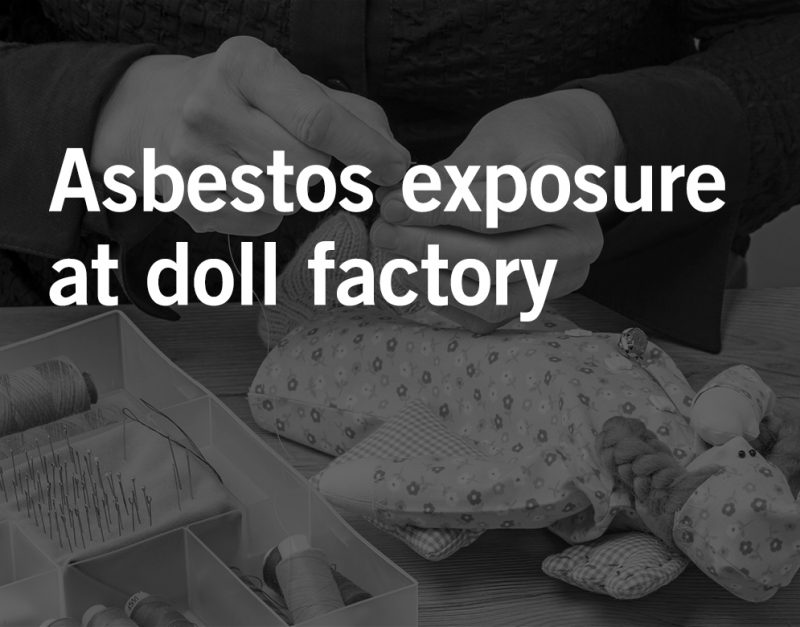 A study published by researchers in Italy suggests that three women diagnosed with pleural mesothelioma, a deadly cancer caused by the inhalation of asbestos fibers, may have contracted the disease from exposure to asbestos while working in cloth doll factories. Of the 757 cases of malignant mesothelioma recorded in the Province of Brescia Mesothelioma Registry, three of the cases were young women employed in cloth doll factories. Two of the women worked in the same factory. After an autopsy was performed on one of the women, it was discovered that she had been exposed to enough asbestos that the classification of her asbestos exposure could be changed from “unknown” to “occupational certified.”

This finding suggests that the three women contracted pleural mesothelioma as a result of occupational exposure to asbestos while working in the cloth doll factory. These factories now join the constantly growing list of over 3,000 identified sources of asbestos exposure.

Why is the Source of Exposure to Asbestos for Women Frequently “Unknown?”

The Italian study suggests that the source of the asbestos exposure for women with pleural mesothelioma was frequently listed as “unknown” because of the difficulty in proving an occupational exposure. Pleural mesothelioma is regarded as a disease predominately affecting men. Men have traditionally been more likely to work jobs that put them in direct and regular contact with asbestos-containing products. Many of these jobs were in industrial settings or shipyards and the men may have directly worked with asbestos-containing equipment such as insulation, fire suits, welding blankets, welding gloves, and other fire-retardant products. Since women and children can be exposed to asbestos from the fibers carried home on the clothes of industrial workers, the source of asbestos exposure for women was frequently assumed to be “life or family environmental exposure.” As a result, because the exact source of the asbestos exposure for women could not be pinpointed, records indicated the source of exposure as “unknown.”

Why Are There So Many Sources of Asbestos?

Prior to the 1970s, asbestos was widely used in many products and industries for its insulating and fire-retardant properties. Asbestos was also popular because it is an extremely versatile product, and can be woven into cloth and other fabrics. In the 1930s, researchers linked asbestos exposure to pleural mesothelioma and other diseases caused by the inhalation of asbestos fibers. Manufactures that used asbestos, however, were hesitant to remove this useful mineral from their products, and actively hid the dangers of asbestos exposure from their employees and the public. Internal memos reveal that manufacturers were covering up the dangers of asbestos. By the 1970s, use of the mineral in the United States had peaked and restrictions were finally put in place regulating continued use.

Unfortunately for many, the damage was already done. Pleural mesothelioma and other diseases caused by the inhalation of asbestos fibers can take decades to appear, which is why new cases of pleural mesothelioma are still manifesting. Also, since asbestos was so widely used, it is nearly impossible to determine every product that might have contained asbestos prior to the 1970s. As a result, new sources of asbestos, like cloth doll factories, are continually being discovered.

What is Being Done to Limit Asbestos Exposure?