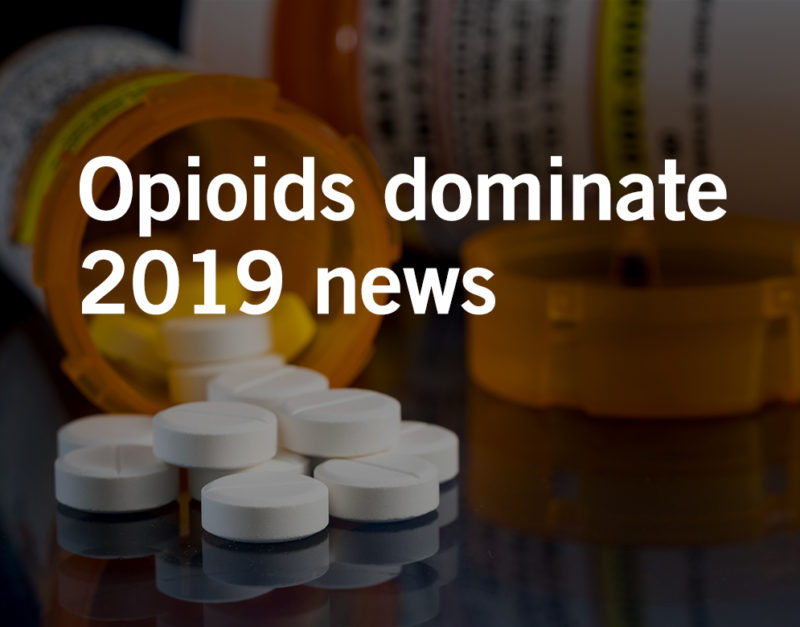 The opioid epidemic dominated news headlines last year, with lawsuits and new regulations aimed at holding manufacturers responsible for prescription drug overdose deaths throughout the United States. Increased awareness of this health crisis has put many drug manufacturers under intense scrutiny—some of which have been found misleading the public about the dangerous side effects of opioids, and been criticized for their deceptive marketing campaigns advertising safe and side-effect-free opioid drugs. Here are some of the top opioid (commonly misspelled ‘opiods’) headlines of 2019.

Marketing Efforts Created the Crisis that led to Opioid Lawsuits

A study published by the JAMA Network Open found positive correlation between marketing dollars spent by pharmaceutical companies on opioids advertising, and the amount of overdose deaths in parts of the country that these ads appeared. To find out more about this study and the effects of the opioid epidemic, read Marketing Efforts Created the Crisis that led to Opioid Lawsuits.

A causal link between prescribed opioid treatment during pregnancy and birth defects in newborns was found in a study published by the American Journal of Obstetrics and Gynecology. Common birth defects that were linked to prenatal opioid use in the study included heart defects and spina bifida, with significant association especially between mothers who gave birth to children with spina bifida and maternal opioid use between 1 month before and 3 months after conception.


If you took prescription opioids during pregnancy and you are now raising a child with special needs, contact the opioids lawyers at Waters Kraus & Paul.

Four pharmaceutical companies reached a $260 million settlement agreement with Ohio’s Cuyahoga and Summit County in what was to be the first federal trial over the opioids crisis. Details of the settlement do not include any admission of wrongdoing on the part of these companies, which include AmerisourceBergen, Cardinal Health, McKesson, or Teva Pharmaceuticals. Many new lawsuits filed against other drug companies have been scheduled for trial in 2020—but the question of how exactly manufacturers will be held liable for the deadly opioid epidemic remains a looming question coming into the new year.

Mussels collected in Washington’s Puget Sound tested positive for oxycodone, based on a 2018 study conducted by the Washington Department of Fish and Wildlife. Mussels are filter feeders, which is why many scientists use them to measure pollution levels in waters. The presence of oxycodone in these mussels found on the shore of the Pacific Northwest reflects the overwhelming number of people who are taking OxyContin®, Percocet®, and other oxycodone opioids in this area.

We are a mid-sized plaintiffs’ opioid law firm committed to holding pharmaceutical companies responsible for opioid-induced illness. Prescription opioids have been linked to birth defects, like heart defects and brain damage, even when the expecting mother has taken the drug as prescribed under a physician’s care. If you took prescription opioids during pregnancy and you are now raising a child with spina bifida, hydrocephaly, glaucoma, gastroschisis, and congenital heart defects, speak with an opioid attorney at Waters Kraus & Paul at 800.226.9880.