Phasing Out Glyphosate: The Kellogg’s Model 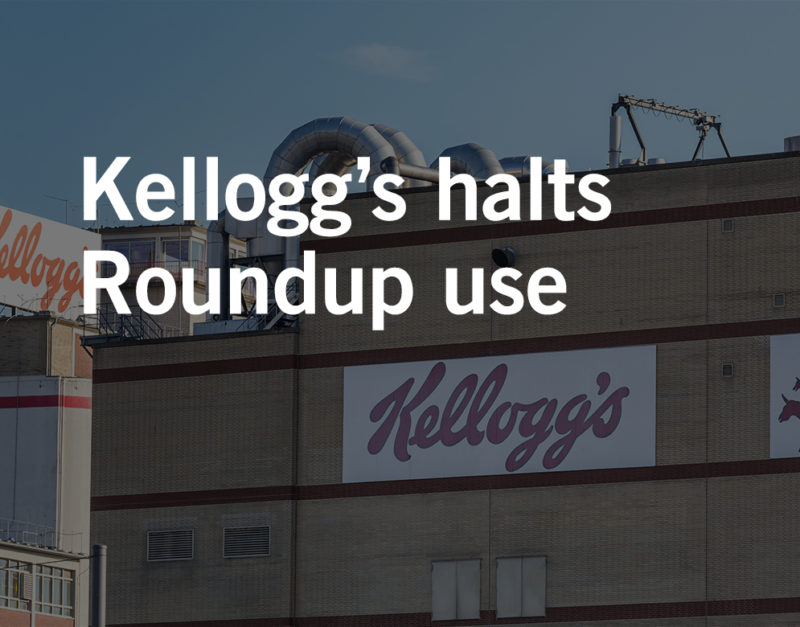 Over 42,700 U.S. lawsuits have been brought forth against the world’s largest agrichemical company. Bayer-Monsanto’s Roundup, or glyphosate, has been associated with cancer development. While the weed-killing herbicide is effective at removing unwanted vegetation without killing crops, it has been deemed “carcinogenic” to humans by the World Health Organization. That is why agricultural and food manufacturing giants like Kellogg’s have committed to discontinuing use of crops which have been treated by glyphosate. Not only is this a decision that reassures consumers of Kellogg’s products, but one which guarantees a safer working environment for farmer workers who harvest the crops.

As the active ingredient in Monsanto Roundup, glyphosate is the most heavily used herbicide in American agriculture. When Roundup is sprayed on plant foliage, it controls the growth of broadleaf weeds and grasses that take water away from crops. Roundup is also used for crop desiccation of specific grains such as wheat, barley, or oats. This process dries out crops more rapidly and evenly to prepare them for harvest when the weather is challenging. It can increase productivity in farms and improve the uniformity of crops, but at a cost. Even though Roundup has been advertised as both biodegradable and safe, researchers at the University of Washington challenged this by evaluating existing studies on the herbicide. They concluded that the weed killer significantly increases the risk of cancer, particularly leukemia and non-Hodgkin Lymphoma.

Since the chemical is profoundly relied upon in the agricultural sector, exposure to it is not very selective. Farm workers are at a constant risk of exposure as vegetation is sprayed and glyphosate is either inhaled or absorbed through the skin. For ordinary consumers of edible goods, produce that is found on supermarket shelves is often treated with Roundup. Anyone can be at risk of developing a disease due to exposure of the herbicide.

Traces of Glyphosate in Food

With 250 million pounds of glyphosate sprayed on American crops each year, there is reasonable concern from consumers of wheat and oat-based products like those of Kellogg’s. While it is intended to ease the harvesting process of produce and grain by killing unwanted weeds, traces of Roundup penetrate the crops too. Though the detected residue of Roundup herbicide in foods like Kellogg’s cereal is below the U.S. Environmental Protection Agency’s (EPA) tolerance limit, research shows that any trace of glyphosate could pose a potential threat to the health and safety of individuals.

Glyphosate in Kellogg’s Wheats and Oats

In late 2019, Kellogg’s announced its commitment to disposing of wheats and oats which have been treated with glyphosate to dry them out. Although the company has claimed that the use of glyphosate as a drying-out agent is not a widespread practice in its supply chain, it seems that the intent is to assure consumers of the safety of wheat and oat-based products that, if not for the presence of the harmful herbicide, are generally associated with high fiber and healthy nutrients.

By 2025, the cereal company hopes that by working with farmers to focus on conservation practices and integrated pest management, the need for herbicides and other chemicals like Roundup to ease the process of harvest will be reduced. Not only is this the best course of action for the health and wellbeing of those tasked with harvesting crops, but in the long run it betters the reputation of Kellogg’s as a business. One can hope it encourages other food manufacturing companies to follow the same example and collaboratively reduce the risk of exposure to carcinogenic products like Roundup.

Seek justice with the help of our experienced attorneys. Our Dallas, Texas, pesticide law firm has battled corporate giants on behalf of individuals like you for 20 years, aggressively fighting to hold companies responsible for dangerous chemicals and the cancers and personal injuries they cause. If you have suffered catastrophic injury caused by Monsanto’s Roundup or other harmful chemicals, we can help.