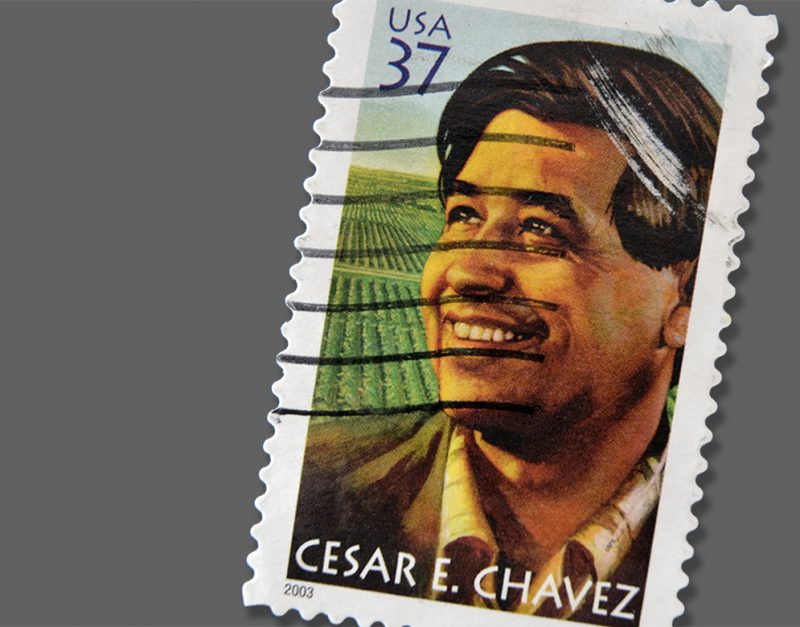 “We draw our strength from the very despair in which we have been forced to live. We shall endure,” Chavez once said of his fight for fair wages and safe working conditions for agricultural workers, a battle that continues to this day.

Chavez, himself a farmworker, is best known for founding the National Farm Workers Association in 1962 with activist Dolores Huerta. The union later became the United Farm Workers (UFW). Chavez toiled alongside men, women, and children in grueling, backbreaking conditions for meager pay while facing brutal weather conditions and dangerous pesticides.

“The fight is never about grapes or lettuce. It is always about people,” Chavez said of his calling.

Chavez was born in Yuma, Arizona, in 1927 to a Mexican American family in a small adobe home. He learned about injustice at a very early age, according to the UFW.

His father had been promised the deed to 40 acres of land surrounding the home in exchange for clearing 80 acres of land. The agreement was broken, and the land and home were sold to someone else. The family moved to California and worked in the fields. Chavez spent two years in the segregated U.S. Navy, returning to California after his honorable discharge.

The UFW achieved the first major collective bargaining agreement with the powerful grape companies of California in 1969. Also, there was an end to the abusive system of labor contracting. Instead, jobs began being assigned by a hiring hall with guaranteed seniority and hiring rights. The labor contracts protected workers from exposure to the dangerous pesticides that are widely used in agriculture.

“During the past few years, I have been studying the plague of pesticides on our land and our food,” Chavez said. “The evil is far greater than even I had thought it to be. It threatens to choke out the life of our people and also the life system that supports us all. This solution to this deadly crisis will not be found in the arrogance of the powerful, but in solidarity with the weak and helpless.”

The workers were given wage increases, clean drinking water, and access to toilets in the fields. The labor contracts also provided for a medical plan, and health clinics were built in Delano, Salinas, and Coachella.

Chavez died peacefully in his sleep in 1993 in Yuma, Arizona. In 1994, he was awarded the Presidential Medal of Freedom posthumously by President Clinton. Today, President Biden has a bust of Chavez on a table behind the president’s Resolute Desk in the Oval Office.

Be Protected from Exposure to Pesticides

In the spirit of Cesar Chavez, Waters Kraus & Paul represents farmworkers who are not properly protected by their employers from exposure to pesticides. Our experienced birth defect lawyers work to hold farms and corporations responsible for mothers and fathers who were exposed to toxic chemicals on the farm and now struggle to help children with birth defects such as missing and deformed limbs, heart defects, and childhood cancers. Contact us by phone at 866-295-4518 to see if we can fight on the behalf of you or your children.