Roundup Linked to Non-Hodgkin’s Lymphoma & the Communities Fighting Back 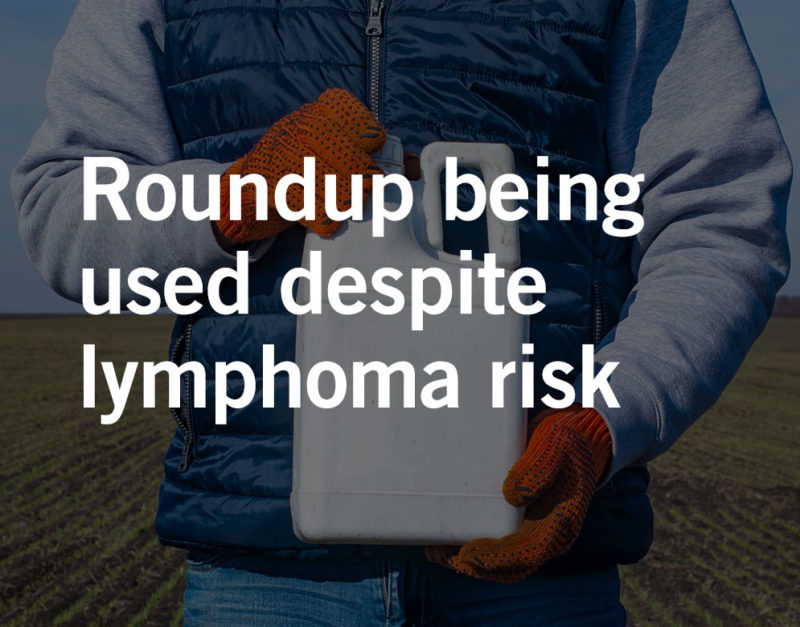 The science over the last decade from the likes of the World Health Organization shows that herbicides with glyphosate—the active ingredient in Monsanto’s Roundup—are carcinogenic. Glyphosate use is also connected with causing birth defects, developmental delays in children, fertility complications, and cancers like non-Hodgkin’s lymphoma. Despite this prevailing wisdom, glyphosate is still used commercially and affects neighboring communities by drifting in the air or seeping into the water supply. However, the people in those communities choose to fight back to protect their health and surrounding ecosystems.

Recent aerial spraying of pesticides in Maine has been criticized for the immediate and persistent harm it poses for Maine’s people and ecosystems in the community of North Woods. The most common chemical sprayed in these woods during forest management to eliminate competing plants is glyphosate. Aerially spraying toxic chemicals like glyphosate is dangerous because the chemical can drift to other properties, which can then be absorbed and cause chromosomal damage, fetal development harm, reduced liver and kidney function, and endocrine system disruption to those who become unknowingly exposed.

Concerned citizens are calling for  Bayer and Monsanto to prove that Roundup is safe to use rather than continue to maintain ignorance of the potential harm their product is causing. According to the fourth principle of public participation, a civilian in Maine from a long line of loggers and acting Senate President, Troy Jackson, has proposed bill LD 125 – An Act to Prohibit the Aerial Spraying of Glyphosate and other Synthetic Herbicides for the Purpose of Silviculture.

Do you suffer from non-Hodgkin’s lymphoma after working with Roundup weed killer? We know your rights.


Speak with our expert attorneys.

Florida is known for a few things—heat, dinosaur insects, and natural beauty tamed with pesticides that may now be doing more harm than good. There are reports of killing off entire marshes with indiscriminate spraying of harmful pesticides containing glyphosate. Glyphosate was originally used to remove calcium deposits in pipes and was never intended to be used as a weed killer that would end up in our water supply.

Now, the catastrophic effects extend to endangered species like Florida’s manatees. According to a University of Florida study, researchers found glyphosate in the blood of more than half of the manatees sampled. The scientists conducting the research were surprised by their own findings, citing the issue with the constant input of chemicals with glyphosate, including Roundup, still readily available for anyone to buy at retail giants like Home Depot.

It will require collective community action to stop using pesticides like Roundup to prevent further damage to surrounding ecosystems. That is not to say that its use has not come without objections from concerned citizens like the angler community who came together to start their own petition on Change.org called “Stop The State-Sanctioned Poisoning Of Our Lakes And Rivers!”

Currently, there is no ban on glyphosate. It appears ubiquitous, according to this study performed at the University of California, San Francisco, which found glyphosate in an alarming 93% of the urine samples that were tested. If this study is any indication, drastic action regarding glyphosate is long overdue.

What’s even more troubling, according to Roundup attorney and Waters & Kraus partner Michael Connett, is the fact that “…internal documents show that Monsanto covered up the risks of Roundup for decades, choosing instead to place corporate profits over the public’s health. Much of our food supply and environment has become contaminated with this cancer-causing chemical as a result.”

With a national presence and a wealth of experience prosecuting pesticide exposure cases, Waters Kraus & Paul has battled corporate giants on behalf of individuals like you for 20 years, aggressively fighting to hold them responsible for failing to keep workers safe. If you have suffered catastrophic injury or cancer caused by Monsanto’s Roundup weed killer or other harmful chemicals, we can help.