Small Victory in Fight Against Mesothelioma 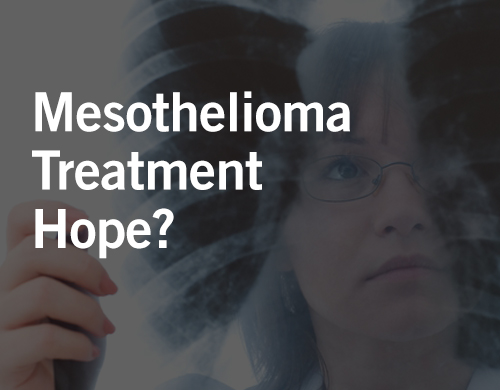 It seems like a war sometimes for those battling pleural mesothelioma. One of the most stubborn and aggressive types of cancer, researchers report that only 1 in 10 patients survive more than five years after diagnosis. Patients and their loved ones often have no choice but to seek physical and emotional comfort instead of controversial and invasive treatments.

There was a glimmer of hope in a recent study by Italian doctors who took a closer look at a small group of patients who responded well to a radical medical treatment known as extrapleural pneumonectomy (EPP). In an EPP procedure, surgeons remove parts of the lung, diaphragm, and the linings of the chest and heart.

According to the study published in The Annals of Thoracic Surgery, those who benefitted from EPP were younger than average and had a form of mesothelioma that targets epithelioid cells (the most common form of mesothelioma) with limited involvement of lymph nodes. Finally, the group tended to have no known link to industries and materials where exposure to asbestos is common, such as mining, construction, heavy industry and the maritime sector.

There’s no silver bullet here, and treatment for those fighting mesothelioma remains somewhat controversial. But the latest findings mark a rare degree of progress in the stubborn fight against mesothelioma, which has no known late-stage cure.

“The optimal surgical approach is still a matter of debate,” said Giovanni Leuzzi, MD, from Regina Elena National Cancer Institute in Rome, Italy, who led the study. “Our study found clinico-surgical factors that can indicate which patients will benefit the most from surgery so that patients and their physicians can better decide the optimal course of therapy.”

The results of the scientists’ study have been published in The Annals of Thoracic Surgery.