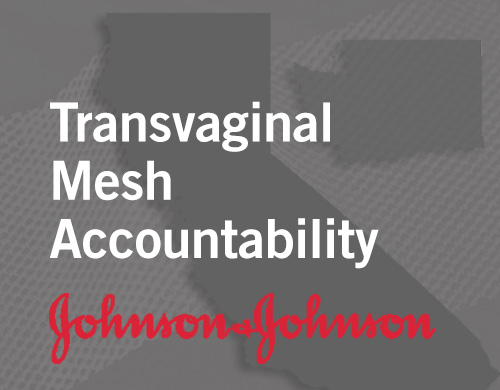 California and Washington state have filed transvaginal mesh lawsuits against Johnson & Johnson, charging that the medical device maker misrepresented the risks of its mesh implants. Transvaginal mesh was supposed to help women suffering from urinary incontinence or pelvic prolapse. Waters Kraus & Paul Texas vaginal mesh attorney Gibbs Henderson, who is also licensed in Texas and Illinois, welcomes the news. “Johnson & Johnson chose not to warn women that the company’s transvaginal mesh product could cause the pain, urinary and sexual injuries that our clients have suffered,” says Coopwood.

Between 2008 and 2014, Johnson & Johnson sold more than 42,000 of its transvaginal mesh implants in California. The lawsuit filed by California Attorney General Kamala Harris reportedly alleges that the company engaged in deceptive marketing and false advertising.

During the same time period, Johnson & Johnson sold 12,000 mesh devices in Washington state. According to Washington state attorney general Bob Ferguson, Johnson & Johnson violated that state’s consumer protection laws when it decided not to tell patients or their doctors that transvaginal mesh can cause infections and chronic inflammation or that the device frequently slices its way through the vaginal wall.

Johnson & Johnson was not the only manufacturer of the dangerous product. Tens of thousands of American women have filed transvaginal mesh lawsuits against other manufacturers as well, including Endo International and Boston Scientific.

Texas vaginal mesh attorney Mr. Henderson describes the injuries suffered by his clients as “horrific.” The trouble for one of Waters Kraus & Paul’s California clients, for example, began when she commented to her gynecologist about mild incontinence problems. If she sneezed or coughed, she might have a problem leaking urine, but the inconvenience was not so serious that she had to wear panty liners or incontinence pads. That was before she was implanted with transvaginal mesh. Manufacturers didn’t tell doctors or patients about the risks.

After the operation, the mother of three developed a severe problem with urinary retention and became unable to urinate. She was forced to have a stent implanted to open her ureter to fix the problem. But that led to multiple painful infections. Then she began to have painful spasms in her lower back that were caused by the transvaginal mesh. At one point, the pain became so debilitating that she was forced to check into the hospital. She was constantly holding her breath because of the pain and actually had to practice breathing exercises to re-learn how to take a simple breath of air.

Waters Kraus & Paul attorneys have learned that transvaginal mesh is harmful not just to women, but to their husbands and the marital relationship as well. In many women, the mesh product cuts its way through the vaginal wall, making intercourse an excruciating experience for both partners. The protruding mesh can also cause bleeding for women whenever they try to make love with their husbands.

Often, the only solution for the many injuries caused by vaginal mesh is additional surgery to go in and try to remove the product as best as possible. Many women, however, never return to a normal life.

The U.S. Food and Drug Administration, in response to the crisis, has required that the products be labeled as high risk and has placed mesh products under more rigorous scrutiny.

Contact a Texas vaginal mesh attorney with Waters Kraus & Paul by email or call us at 800.226.9880 to learn how we can assist you.