The Hawks Nest Tunnel Disaster – A Tragedy We Cannot Repeat 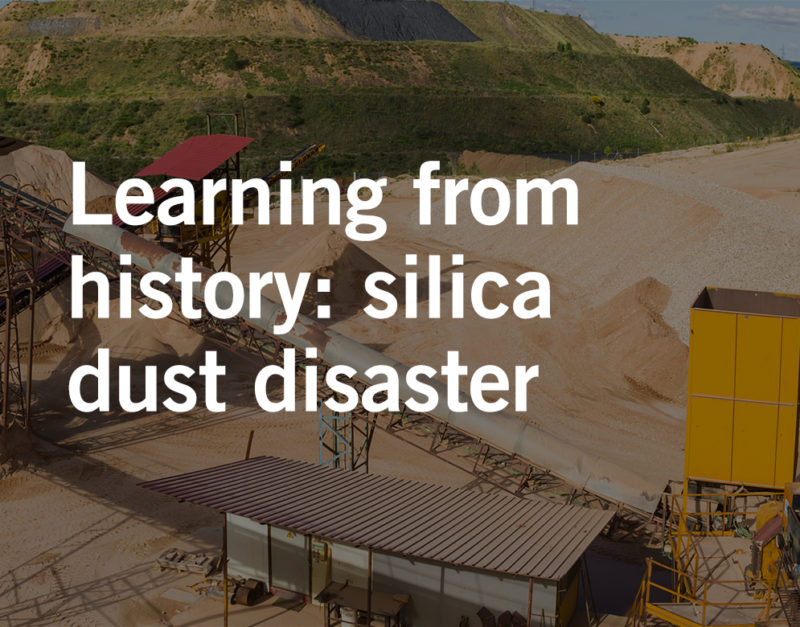 In the opening lyric of John Denver’s signature classic Take me Home, Country Roads, he describes West Virginia as “almost heaven”—an accurate portrayal of the Mountain State in the eyes of its people. Its picturesque green fields and overlooks make for a hiker’s or a rock climber’s dream come true. But with all its untouched nature and breathtaking views, West Virginia is home to what many consider the worst industrial disaster in American history. Ninety years ago, an atmosphere of deadly dust blurred the eyes and choked the lungs of workers inside the Hawks Nest Tunnel, located on the New River in Gauley Bridge. The incident resulted in hundreds, or possibly thousands, of workers dying from exposure to toxic silica dust, a mineral that slices the lungs like shards of glass and develops into silicosis.

A Health Disaster that Spanned Years

The construction of the Hawks Nest Tunnel was a Great Depression-era project that attracted thousands of men hoping to break bread at the end of the day. Nearly three-fourths of the tunnel workers who came to West Virginia were African American men fleeing widespread unemployment in the South. When Union Carbide and Carbon Corp. began constructing the 3-mile tunnel in the spring of 1930, they projected completion would take place in four years. But with almost 3,000 workers laboring in shifts of 10 or 15 hours each, the project wrapped in no more than 18 months. But the fast-paced progress took a devastating toll on the workforce.

Gauley Mountain, where they built the tunnel, is 99 percent pure sandstone – a valuable commodity in 1930. But, as it turned out, drilling through all that sandstone kicked up clouds of silica dust. By inhaling silica over an extended period of time, many workers fell ill. One worker said the dust was so thick, he could practically chew it. According to Union Carbide documents, 80 percent of the workers became ill, died, or walked off the job after six months. Those who bravely left the scene early on lingered elsewhere as their lungs scarred and deteriorated slowly in the next few years.

The Face of Corporate Neglect in the Jim Crow Era

While hundreds of local white men worked in the tunnel alongside Black migrant workers, conditions were intentionally made worse for more than 2,000 Black men. Workers’ camps were segregated, with African Americans assigned the dirtiest and deadliest work. They not only received lower wages than their white counterparts, but many testifying before Congress in 1936 said the company denied them 30-minute breaks in clean air. Others stated that supervisors would force them from bed at gunpoint. In the end, the U.S. House of Representatives Committee on Labor said Union Carbide completed the tunnel with “grave and inhuman disregard for all consideration for the health, lives and future of the employees.”

What Do Victims of Silicosis Go Through?

The occupational lung disease wasn’t a new or unfamiliar disease at the time of the tunnel disaster. On the contrary, it was “well known to medical professionals and to properly qualified engineers.” Today, evidence indicates that the tunnel contractor knew of the dangers of silica dust. They knew that when silica becomes embedded in the lungs, it eventually results in a slow, agonizing death. Some common symptoms of silicosis include:

Despite all efforts by the government to relieve the victims of the Hawks Nest Tunnel Disaster, most still suffered painful and sleepless nights until their deaths. Unfortunately, the 2 million U.S. workers exposed to silica now in several industries like construction and mining, and most recently engineered stone fabrication, likely feel the same way. Therefore, it’s important to consider what could happen today, as the occurrence of another disaster involving massive loss of life may at first seem remote, it is nonetheless possible.

Seek justice with the help of our experienced silicosis attorneys. Our Dallas, Texas, law firm represents workers exposed to dangerous silica dust on the job, aggressively fighting to hold these companies responsible for failing to keep workers safe. If you or a loved one has suffered chronic lung diseases like silicosis, we can help.