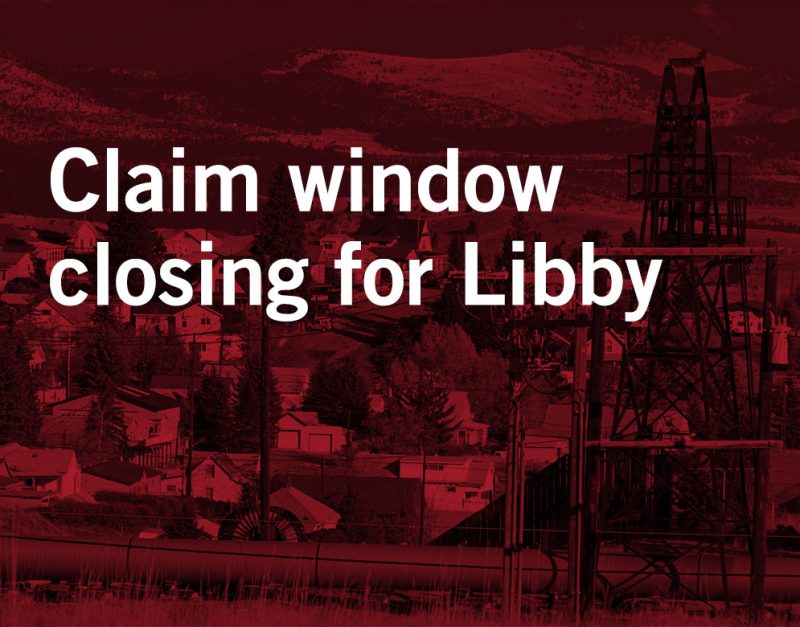 Time is running out as the statute of limitations winds down for victims of asbestos related illnesses.

The three year statute of limitations allowing possible recovery for those who developed asbestos-related diseases as a result of living and working in Libby, Montana is set to expire on February 25, 2018. While the statute of limitations in Montana to file a personal injury claim is three years from the date of diagnosis, because of W.R. Grace & Co.’s bankruptcy filing, the statute did not begin until February 25, 2015.

Over three quarters of the vermiculite in the world was produced from a mine in Libby. The mineral was discovered to be in a mountain in 1919 and bought by W.R. Grace & Co. in 1963. It turned out to be, what seemed at the time, a perfect material for loft and wall insulation, fire-proofing, and soil conditioner. However, along with the vermiculite was substantial contamination with a dangerous form of asbestos occurring naturally within the mineral.

In the beginning, lawsuits were given a narrow time to file as the statute of limitations in Montana required plaintiffs to file personal or wrongful death cases within three years of learning about any facts leading them to file claim. However, in 1995, the Montana Supreme Court ruled that workers who became sick could still file, permitting they were able to show the company harmed them intentionally.

In 1999, news reports publicized a direct connection between the vermiculite mine and the many people who were ill and even dying due to exposure to asbestos dust in Libby. In 2001, W.R. Grace & Co. filed for bankruptcy protection, but now that the company has come out of its bankruptcy, anyone diagnosed prior to February 25, 2015, with an asbestos-related disease who lived in Lincoln County for at least six months has until February 25 of this year to file a claim.

Known for its fire-retardant properties, asbestos is a fibrous material that was once used in insulating and construction products across the U.S. It creates a fine dust when handled and inhaled that can cause deadly illnesses.

The problem is that the two most commonly noted asbestos-related diseases, asbestosis and mesothelioma, have latency periods of up to 40 years. This means that some people may not be diagnosed until after the statute of limitations runs out and without them even being aware they have any damages. As such, many people who have yet to be diagnosed with an asbestos-related illness, will have no recompense after February 25th.

Asbestosis is a lung disease specifically caused by inhaling asbestos dust. It can be fatal in some cases as it produces inflammation and scarring in one’s lungs and can be an early sign of mesothelioma. Malignant Mesothelioma is a cancer in which malignant cells line the chest, abdominal cavity, or heart. On average, a mesothelioma patient is between 50 and 70 years of age. Even during trial Dr. Alan Whitehouse, a pulmonologist diagnosing Libby area patients said, “I don’t think we’ll see the last of these until 2030 and maybe longer.”

This is because mine workers were not the only people at risk for developing a deadly asbestos related disease such as pleural mesothelioma. When mine workers came home from work, they brought with them asbestos-laden clothes, unwittingly exposing their family members to asbestos dust particles. Perhaps even worse is the fact that children in Libby played amongst the vermiculite slag that W.R. Grace donated to four schools to make running tracks, an ice rink and two junior baseball pitches.

Waters Kraus & Paul is a mid-sized plaintiffs’ firm dedicated to holding companies responsible for failing to adequately protect workers and their families from asbestos exposure. The firm’s asbestos attorneys have decades of experience pursuing pleural mesothelioma lawsuits, and will fight to ensure you get the compensation you deserve. If you have been diagnosed with a disease caused by asbestos exposure, such as pleural mesothelioma or lung cancer, email or call 800.226.9880 to see how the asbestos attorneys at Waters Kraus & Paul can help you seek justice.