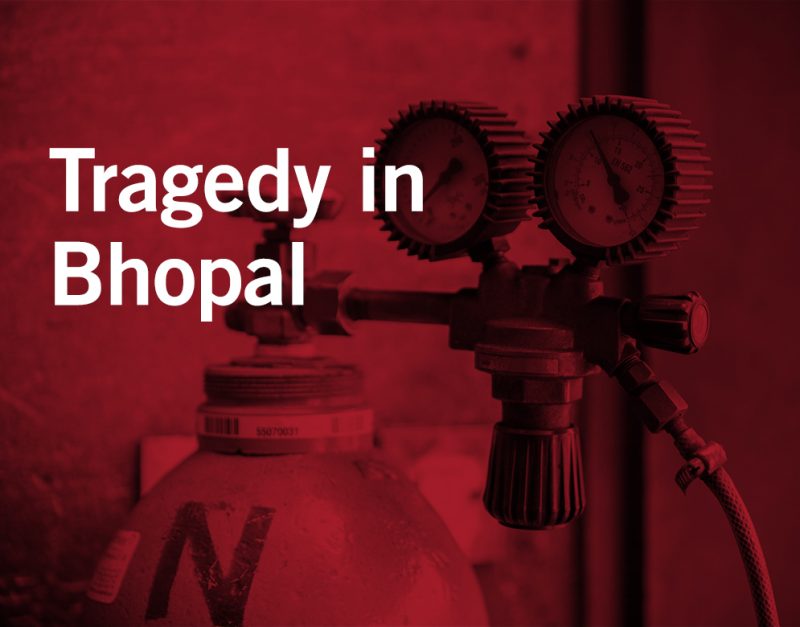 The Bhopal Disaster in India, One of the Worst Industrial Accidents Ever, Shows What Can Happen When an Industry Goes Unchecked

What Caused the Bhopal Disaster in India?

Bhopal, a city of one million residents in the state of Madhya Pradesh, India, was home to a pesticide plant owned and operated by Union Carbide India Limited, the Indian branch of the Union Carbide Corporation (UCC). Many readers may recognize the Union Carbide name as it was at one time a major manufacturer of asbestos-containing products and miner and supplier of asbestos fiber. The Bhopal pesticide plant used a hazardous chemical, methyl isocyanate, to create a pesticide sold in India. However, demand for this pesticide had decreased in the early 1980s. Union Carbide India Limited responded by cutting costs across its plant in an effort to maintain steady profit levels. Safety devices were slow to be repaired or turned off completely, training and education of employees was minimal, and the number of workers employed to maintain the plant was cut in half prior to the accident. These attempts to reduce costs at the expense of safety would prove deadly.

Late on the night of December 2, 1984, a gas leak was detected in the factory. Instruments used to monitor conditions in the tank, which housed the majority of the methyl isocyanate, showed increasing pressure and temperature. But, these devices were known by the factory employees to frequently malfunction. The employees did not take the readings seriously and assumed the leak was a minor problem that could be handled easily. Little did they know that a powerful chemical reaction was occurring within that tank – the result of water, which was not supposed to be added to the tank, mixing with about 40 tons of methyl isocyanate. Several safety devices designed to control and mitigate the danger of this sort of chemical reaction were either broken or turned off.

Approximately two hours after the initial leak was detected, a safety valve in the large tank gave way to the tremendous pressure of the chemical reaction, releasing many tons of poisonous gas into the air over Bhopal. The cloud of deadly gas enveloped the city, and nearly 4,000 people dropped dead almost immediately. Hospitals were flooded with the sick and dying. By the time the cloud of toxic gas dispersed a few days later, much of the city had been poisoned by the harmful chemicals, leading to adverse health problems, increased mortality rates, and thousands of more deaths.

Who is to Blame for This Tragedy?

Corporate greed is responsible for the loss of thousands of lives in Bhopal. Cutting costs by reducing safety measures, especially when dealing with such a large amount of a dangerous chemical, is a recipe for disaster. Subsequent analysis of the incident showed that numerous safety control measures were violated. Had proper safety protocol been followed, the powerful chemical reaction that occurred in the large mixing tank could have been contained or controlled. This would have saved most, if not all, of the thousands of lives lost. This tragedy highlights the need for tighter industry controls to prevent corporations from putting profits ahead of safety, and dollars ahead of lives.

How Can We Prevent Another Incident like the Bhopal Disaster?

The Bhopal Disaster made clear the need to have tighter controls on dangerous industries. Greedy corporations have consistently shown a pattern of cutting costs, to the detriment of health and safety, in order to maximize profits. Many industries still lack the proper level of controls and regulations to force corporations to keep both workers and consumers safe. Examples of such industries are:

Firms like Waters Kraus & Paul are fighting to increase regulations on these dangerous industries to make sure safety is put before profits.