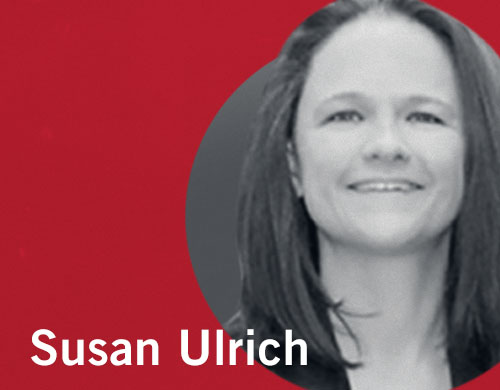 Susan Ulrich is an attorney at Waters Kraus & Paul in the firm’s Los Angeles office. A native of Massachusetts, Susan graduated with her bachelor’s degree in politics and American studies from Brandeis University. She was later awarded a Juris Doctor degree from Northeastern University School of Law. She has served on the Board of Directors for Roca, Inc., an organization dedicated to transforming the lives of the most high-risk young people. In her legal practice, Susan represents victims of mesothelioma caused by asbestos exposure, as well as families dealing with birth defects resulting from chemical exposures in the semiconductor and commercial agriculture industries.

Here’s what Susan had to say during our Women’s History Month Women In Law Roundtable Q&A.

Waters Kraus & Paul: According to the American Bar Association, there are approximately 1.4 million licensed attorneys in the United States. While there may be obvious overlap in experiences and reasons for choosing to become a lawyer, no two people are the same. What, or who is it that inspired you to pursue a career in law?

Susan Ulrich: Prior to being a lawyer, I worked for non-profits and with at-risk populations. During that time, I realized that I was limited in how much I could help people. So, almost all my drive came from the responsibility I felt for the people I worked with. That really prompted me to go to law school so that I could be of more assistance to them.

WKP: Continued determination and a tough work ethic are part of a universal code shared among successful attorneys. In fact, a career as a lawyer has been a hallmark of prestige for generations now. But what exactly enabled your career to flourish? How would you personally encourage young girls thinking about becoming attorneys but are scared of the challenges that lie ahead?

SU: I come from a place where most people don’t go to college, and certainly not law school. Even though it was a fairly large community, not many made it out, and not many of us had the encouragement to pursue higher education. But I think what I’ve learned through my own experience is that as long as you put a lot of work in for what you believe you want, and you find at least a few people who can help support you in the process – just as I have had a very supportive family, who may not have always understood what I was doing and why I wanted to do it, but certainly supported the process – I believe success is foreseeable.

WKP: Amid the COVID-19 pandemic, many routine legal proceedings like working from the office and court attendance have been suspended or amended. How have these changes impacted your own career? As a professional, what are the biggest challenges faced when working from home?

SU: Well, first of all, working from home has been great for me. But the nature of that as a woman is the fact that men have been seen as the people who go to work, and women have been seen as the caretakers. I do think there needs to be a radical change in how men associate with home and caretaking and family, especially in light of the pandemic. When women have babies – just like I have a 2-year-old now – it’s part of the reason working from home is challenging. At the same time, though, it’s great! Because I’m happy to spend more time with my child. And I think that’s something most mothers would say.

WKP: Do you believe there is some aspect of gender disparity between how men and women work from home?

SU: Whether it was before or during this pandemic, women working from home are so resilient despite the challenges they face, especially as mothers! I mean, we’re in 2021, and we’re still dealing with this illogical thinking that there are lines that can be drawn at home for who cares for what, and I think that at the end of the day, the most resilient people you will ever meet and ever encounter are women who have children. It would serve every firm well to mentor and focus on the growth of the women in their firms, especially mothers, in a real, impactful way.

WKP: Where do you think we are in terms of gender equality in the legal profession? Do you believe that people’s expectations of women lawyers have changed in the past 50 years?

SU: I think gender equality in law school specifically has leaped light-years along. But gender equity as lawyers – the actual profession—has moved at a glacial pace. The reality of being a working female lawyer means that you have so many other considerations [relative to men] because it’s 2021, and we’re still the primary caregivers, no matter what. So, female legal careers are affected by the slow pace with which the legal profession has evolved, partly because men are still in charge.

WKP: What do you think needs to change in our society, or possibly even in our world, for women to be given their fair share in their legal professions, and every other profession?

SU: When I think about actual and considerable societal “change,” I think about the globally acknowledged MeToo movement. It really addressed some basics like women need to stop being sexually assaulted and harassed at work. I will always appreciate that. But what it didn’t address is the unspoken bias that happens every day to women in law firms or any other professional setting – the conception that women can’t lead, that women talk too much, that women are too bossy. Those things are still alive and well in the legal profession. Unfortunately, I think for the next 30 years, or so it will be difficult for women to be in positions of power because those long-standing biases are still pretty strong in the legal profession.

To read more interviews with our attorneys, check out our Waters Kraus & Paul Virtual Roundtable Q&A: Women In Law.