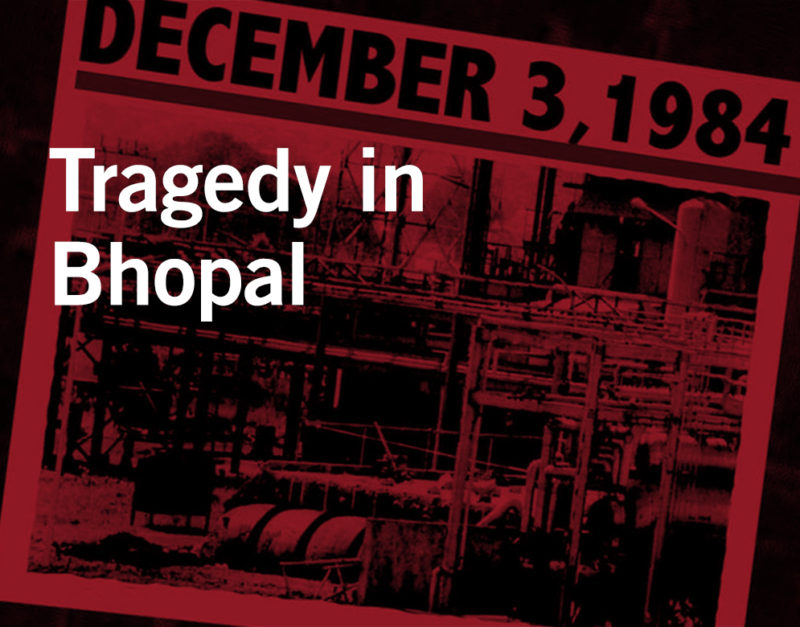 On the fateful night of December 2, 1984 and into the morning of December 3, 1984, the worst industrial incident in world history took place in Bhopal, India. The small Indian city was home to the Union Carbide factory, a pesticide plant that spewed 40 tons of toxic gas and scorched the throats, eyes, and lives of Bhopal’s residents. The tragic event immediately killed more than 3,800 people and resulted in the death of many more in the days and years to come.

In the decades since the accident, the site of industrial waste remains mostly unchanged since three separate entities – Union Carbide Corporation (UCC), DowDuPont, and the state government of Madhya Pradesh – have continued to take a pass on the unpleasant burden of responsibility even after all this time. The Bhopal gas tragedy, as it became known, raised urgent questions about how corporations and governments should conduct themselves when disasters like that take place, especially when a pattern of neglect regarding safety procedures and protective equipment comes into play. Indian families that suffered from the deadly event believe that governmental neglect continues to this day, only now in the form of a mishandled pandemic.

To preserve profits, UCC slashed its factory’s budget in 1984 when the facility was expected to shut down. As a result, it continued to operate far below the reasonable staffing and maintenance standards despite the protest of many of Bhopal’s local communities.

A faulty valve released a ton of water into a storage tank that night, allowing it to mix with methyl isocyanate (MIC), a toxic chemical used to produce pesticides. The reaction eventually yielded immense heat and explosive pressure built up inside the tank.

At 1 a.m. the next morning, the lethal substance made its way into and around the small towns located near the plant with the help of the swift wind that blew. Within hours of the massive gas leak, human corpses and animal carcasses littered the streets. Those who did not lose their lives that night woke, gasping for clean air, with their eyes burning from the fumes.

The Indian government reported that more than half a million people were exposed to the gas, including at least 200,000 children who were affected most, as MIC is twice as heavy as air and much more difficult for small lungs to breathe in. According to Amnesty International, at least 7,000 people died within the first three days of the spill, and about 25,000 people overall have succumbed to MIC exposure. Until this day, 500,000 Bhopal residents have lingering health problems – an indication as to how hazardous pesticide chemicals can be.

Bhopal’s story is the same recounted story of the many industrial cities and mill towns that have been forgotten despite their tragedies. As we have seen before, such an event splits a community into two groups: those who can afford to leave and those bound to the area due to financial hardship and obligation. When companies repeatedly neglect their responsibility and quality of operations, it is unacceptable that their employees and families must pay the price.

Not only had UCC and others overlooked poor safety standards as the plant was anticipated to be closed, but when building the plant, they chose a site that had not been zoned for hazardous industrial use. By consistently shifting the blame on each other and failing to compensate victims of the gas leak, all the parties involved persisted in acting carelessly with little regard for employees and the public.