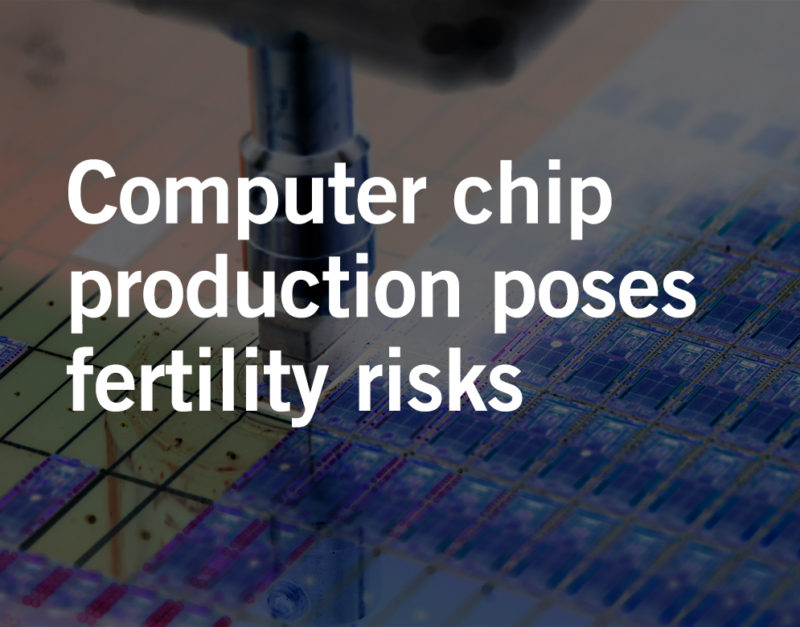 In the last few decades, technological advancements have immersed so solidly into the fabric of our global society that they show no signs of slowing down. Computers in all forms, whether smartphones or laptops have become part and parcel of our daily lives—especially since the onset of the 2020 COVID-19 pandemic. Our demand for high-tech will continue to grow in the coming months with the need for social distancing to contain the virus’s spread. As such, the production of electronics will need to expand. However, with our lifestyles becoming much more techno-oriented and dependent on electronic convenience, we fail to consider the harmful effects of the chemicals used to make such technology available and the damage to human health.

The Toxic Problem with Computer Chips

In 1992, a University of California, Davis medical school study showed a range of health problems for women chip workers. The $3.8 million-funded research, sponsored by the Semiconductor Industry Association (SIA), revealed that pregnant women working in computer chip fabrication areas showed a 40% increase in miscarriages compared to women working in non-fabrication areas. The study’s findings were considered “statistically significant” because they also established other serious reproductive issues for women working in the chipmaking industry. Not only did it take much longer for women working in chip factories to get pregnant, but their children were more prone to developing life-threatening birth defects.

To verify the conclusions made by the UC-Davis team, other follow-up studies were funded by the SIA. In a few short months, similar results were confirmed by different researchers: roughly a doubling rate of miscarriages for thousands of women potentially exposed to reproductive toxins, mutagens, and carcinogens. Amid this revelation, the industry decided to react quickly. SIA pointed to the toxic chemicals widely used in chipmaking as the likely cause and declared that its companies would accelerate efforts to phase them out. At the time, top technology companies like International Business Machines Corp. (IBM) went as far as pledging to rid their global chip production of these chemicals by 1995. The collective action taken by the entire industry felt like a victory for public health, but unfortunately, the decades that passed proved the story to end differently.

As semiconductor production and general manufacturing shifted to less expensive countries, the industry’s promise to phase out toxic chemicals was not so much fulfilled as it was moved to a different part of the world. Confidential data reviewed by Bloomberg Businessweek show that thousands of women and their unborn children continued to face potential exposure to the same toxins until at least 2015. Many are probably still exposed today in countries like South Korea and China. The price paid by women making the devices at the heart of the global economy is the reproductive-health effects first uncovered in 1992: miscarriage, sterility, and birth defects.

With recent talk about potentially bringing back chip manufacturing to our nation, the potential move could likely bring a host of unresolved health hazards back with it.

Waters Kraus & Paul is a national plaintiffs’ law firm devoted to helping families in personal injury and wrongful death cases involving asbestos and mesothelioma, benzene exposure, dangerous pharmaceuticals, medical devices, and birth defects caused by pesticides, toxic chemicals, opioid use, and semiconductor chip manufacturing. The law firm also represents plaintiffs in qui tam whistleblower matters and cases that uncover false claims submitted to the government. Based in Dallas, Texas, with offices in Los Angeles, California, and by appointment in Moline, Illinois, Waters Kraus & Paul has represented families from all fifty states and many foreign countries, as well as foreign governments.