The Bhopal Disaster: The Human Cost of Cutting Corners 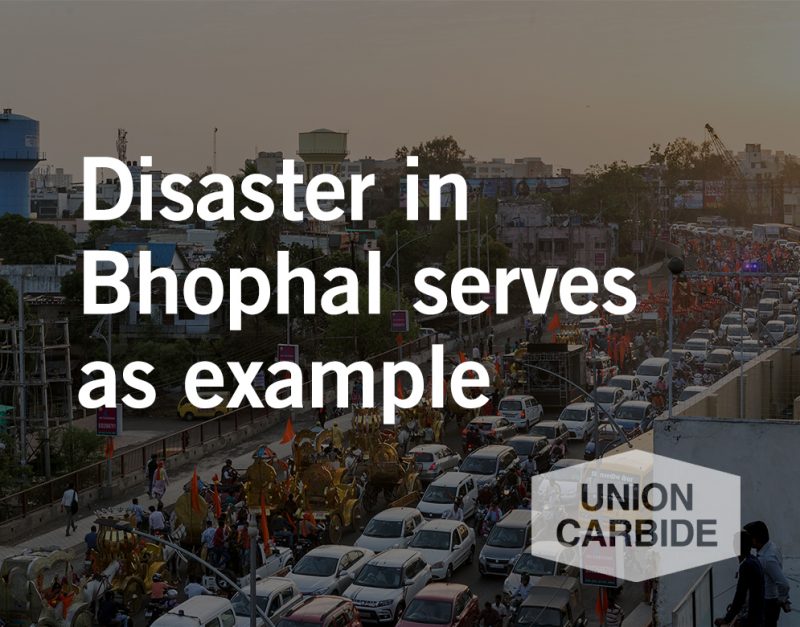 On the night of Dec. 2, 1984, the worst industrial accident in world history took place in Bhopal, India, immediately killing more than 3,800 people and resulting in the death of many more in the days and years to come.

The Industrial Accident in Bhopal

On that fateful night, a pattern of neglect toward safety procedures and equipment came to a head in a pesticide factory owned by Union Carbide Corporation (UCC). To preserve profits, the company slashed budgets as the plant prepared to be shut down. In the interim, it continued to operate with safety procedures, equipment, and staffing far below reasonable standards.

That night, a faulty valve released one ton of water into a storage tank, allowing it to mix with methyl isocyanate, a toxic chemical used to produce the pesticide. A powerful chemical reaction producing heat and explosive pressure began building.

A safety device meant to neutralize toxic discharge had been taken out of operation three weeks earlier, other safety devices were not working — and because the operational safety equipment often malfunctioned, the staff ignored the one meter that detected a leak.

At around 1 a.m. the next morning, the pressure reached an unbearable point in the tank, a safety valve gave way, and 40 tons of toxic gas spewed into the air over Bhopal. Within hours, human corpses and animal carcasses littered the streets. Most of the people who died were from the poor village adjacent to the UCC plant.

The Indian government reported that more than half a million people were exposed to the gas, including at least 200,000 children. In the first day, it is estimated that the initial plume of gas killed as many 10,000 people with 15,000 to 20,000 premature deaths reportedly occurring in the subsequent two decades.

Not only had UCC overlooked poor safety standards as the plant was being closed, but also, when building the plant, it chose a site that had not even been zoned for hazardous industry — just light industrial commercial use

After the disaster, UCC worked to deny culpability by shifting the blame to its sister company, Union Carbide India Limited, saying that the plant was completely built and operated by the Indian subsidiary. UCC even went as far as to fabricate scenarios involving sabotage by disgruntled employees.

Unfortunately, companies continue to act carelessly with little regard for employees and the public, and the warning of the Bhopal disaster has not been heeded. The latest gas leak at an LG factory in Visakhapatnam, India, has drawn immediate comparisons to the 1984 incident. With 11 dead and hundreds more sickened from toxic vapor released from the chemical plant, it seems that poor regulations and corporate negligence are still to blame. Unthinkable disasters will continue unless corporations are held accountable for putting corporate greed above people. We cannot accept cutting corners when it costs lives.