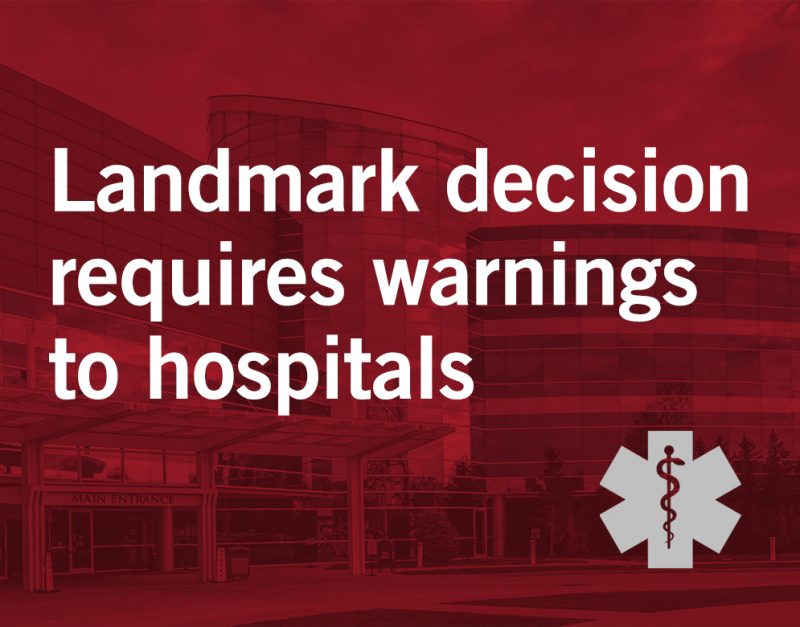 On February 9, 2017, the Washington Supreme Court issued an important ruling in the case of Taylor v. Intuitive Surgical, Inc., requiring manufacturers of medical devices to give warnings to purchasing hospitals about the dangers of their products. In Taylor, a man died four years after surgery and the cause of death was determined to be complications that arose during the surgery as a result of the use of a medical device called a da Vinci robot. Taylor is a landmark decision – the first major decision to determine that manufacturers owe a separate duty to warn hospitals, rather than only having the duty to warn doctors who actually use the product or the patient themselves.

The Court determined that the Washington Products Liability Act mandated a manufacturer’s duty to warn hospitals, but this duty may be similarly created by courts in other states. The foundation of this requirement is a basic principle of tort law – a manufacturer has a duty to warn the consumer. Hospitals, as purchasers, are the consumers of these medical devices, and thus other states may impose the same duty on manufacturers that the Washington Supreme Court did, referring to this basic principle of tort law.

What Does This Mean For Patients?

If other states follow Washington’s lead and require manufacturers of medical devices to warn hospitals of the dangers of their products, this could have a major positive impact on patients across the country.

This additional duty to warn could lead to extra safety for patients. If a warning must be issued to hospitals, in addition to doctors and patients, there is an extra safeguard on the use of potentially dangerous medical devices. The hospital would be in a better position to be aware of the hazards of a medical device before deciding to purchase it, creating a check on patient safety before the doctors and patients are ever required to weigh the risks and benefits of using the device.

Manufacturers, of course, would prefer to avoid this additional advancement in transparency…

Medical device manufactures have threatened that requiring this additional step will reduce their willingness to produce new products. They claim to fear the extra risk involved with alerting hospitals. Namely, medical device makers argue there would be a greater potential for law suits alleging a manufacturer’s failure to warn the hospital as a cause of a patient’s injury. But, the additional communication with hospitals and heightened requirement are desirable. The new regulation will provide for better transparency and serve to advance patient safety across the country.