The First Countertop Worker in U.S. Diagnosed with Silicosis 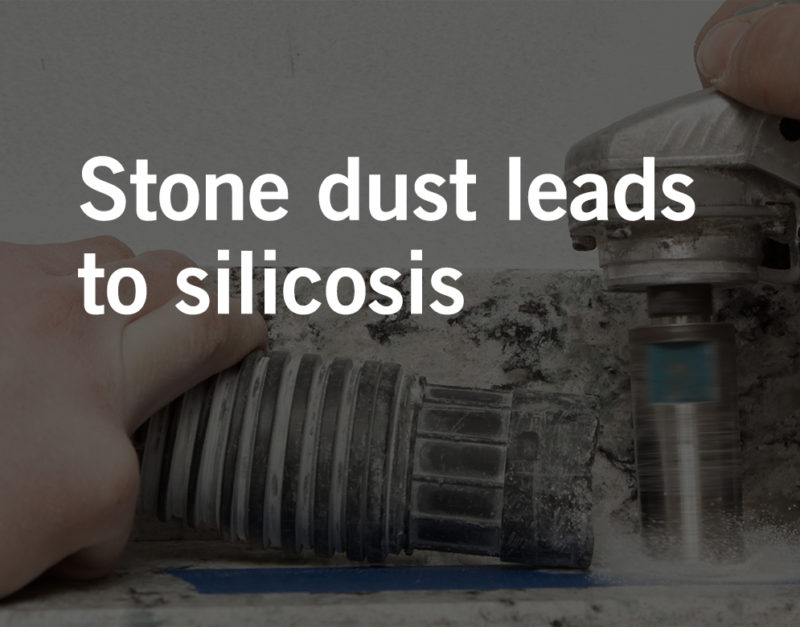 Since its creation in the late 1980s, quartz (an industry term for engineered stone) has been used in custom home building and improvement. The engineered stone’s durability and fashionable element has prompted it to become a popular material used in kitchens and bathrooms. While the manufacturing of the stone has been attributed to a fast-growing industry, the workers who fabricate and install quartz onto kitchen and bathroom surfaces are at risk of exposure to silica dust, and in turn, silicosis. In recent years, several engineered stone workers who have fallen ill with the disease have filed suit against their former employers, citing negligence and a failure to protect.

Silicosis is a progressive lung disease that is caused by inhaling crystalline silica. As the oldest occupational respiratory disease, U.S. manual labor workers are most commonly diagnosed with silicosis as a result of exposure to materials with high silica content. This is especially true for workers who cut and polish engineered stone like “quartz”. By regularly breathing in silica dust, the lungs are physically damaged, making it difficult for individuals to breathe efficiently. Other symptoms victims of silicosis can experience include:

Unfortunately, the symptoms of silicosis may increase in severity due to the gradual nature of the disease. Contracting silicosis may also leave individuals prone to developing other illnesses such as lung cancer and tuberculosis. While the limited treatment options for silicosis yield discouraging prospects of overcoming the diagnosis, effective prevention methods do exist. The installation of dust controllers and air monitors as well as the use of wet cutting methods, are a few of the many ways engineered stone companies may guarantee the safety and health of their workers. Despite knowledge of this, businesses have neglected to adopt such measures, and instead have been responsible for the illness of many confirmed engineered stone fabrication workers across several states.


Did you get silicosis after exposure to silica from engineered stone? Speak with our experienced lawyers.

With the support of newly emerging research, more individuals with silicosis have been willing to file suit against employers who fail to provide safe working environments, and neglect to inform workers of the dangers that encompass their jobs as stone cutters. This is addressed in an investigative report conducted by NPR on silicosis in U.S. engineered stone workers.

The main subject of NPR’s in-depth article is Ublester Rodriguez, the first person known to have fallen ill with silicosis in the United States after exposure to dust from engineered stone. Rodriguez, 42, was tasked for years with cutting and polishing engineered stone to fit kitchen and bathroom countertops. By being exposed to silica dust through working conditions that are less than ideal, Rodriguez’s lungs deteriorated to a point where a transplant is needed to keep him alive.

While at work, Rodriguez recalls being surrounded by dust from dry-cutting engineered stone. Although the company he worked for changed the practice years later, Rodriguez and his co-workers were not required to cut stone using water. Instead, slabs for countertops were cut dry. This practice intensifies the accumulation of silica dust in the warehouse, making all workers vulnerable to breathing in physically damaging particles. Though quartz requires precaution when handling it, it seems that the risk of silicosis arises not only from the material itself, but from an entire industry’s lack of accountability.

How the Engineered Stone Industry Fails Its Workers

Ublester Rodriguez first learned what crystalline silica was when his doctor diagnosed him with silicosis. Even though quartz is composed of up to 90% crystalline silica, he was neither informed of the contents of the stone, nor of its relevant health implications. Rodriguez’s employers neglected to keep him safe.

The failure to provide a safe working environment is apparent in the lack of adequate safety procedures and equipment. While Rodriguez was fit-tested for a sandblasting respirator in 2002, he and his co-workers operated for years using simple face masks to ward off dust. They had already been exposed to high levels of silica. Despite the presence of sandblasting respirators, government regulations require their use as a last resort, only.  Preventative measures such as the use of HEPA-filtered vacuums and water are deemed primary sources of protection. Without the availability of such equipment, sandblasting respirators prove to be futile.

What Can Be Done?

With decreased mobility and difficulty breathing, Ublester Rodriguez is now limited in what he can do as a father, not only in monetarily providing for his children, but in physically supporting them too. His ability to fight back against an incurable disease declines every day. But what he has effectively done is come forward with his story, as to ensure that no other engineered stone worker is subjected to the same dangerous working environment and exposure to silica.

Seek justice with the help of our experienced attorneys. Our Dallas, Texas silicosis law firm has battled corporate giants on behalf of individuals like you for 20 years, aggressively fighting those responsible for dangerous materials and the personal injury and lung diseases they caused. If you have suffered catastrophic injury or loss resulting from dangerous products, we can help.