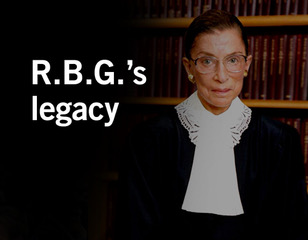 With March marking Women’s History Month, it’s important that we at Waters Kraus & Paul celebrate a pioneer for gender equality in the law – Justice Ruth Bader Ginsburg. For her 27 years of service on the U.S. Supreme Court, Justice Ginsburg, or Notorious R.B.G., developed a breathtaking legal legacy while becoming an icon for young women who aspire to enter a field primarily dominated by men. Remarkably, Justice Ginsburg is celebrated for more than just her legal intellect, but also her role as a co-founder of the Women’s Rights Project at the American Civil Liberties Union (ACLU). In her own words, R.B.G. believed that “women’s rights are an essential part of the overall human rights agenda, trained on the equal dignity and ability to live in freedom all people should enjoy.”

An Example to Live By

Throughout her distinguished career, Justice Ginsburg was not alone in her pursuit of greatness and received much support from talented and dedicated women along the way, including her dutiful mother. Celia Bader encouraged her daughter to practice independence in a way that was unusual for women of her generation – through the study of law. In 1956, young Ginsburg became one of only nine women to be accepted at Harvard Law School. Although she arrived without a civil rights agenda, the treatment Ginsburg received as a woman in law school honed her feminist instincts, especially when she and her female classmates were asked by the dean why they occupied seats that could otherwise be filled by men.

Her early days at Harvard were filled with fright and uncertainty, particularly when her husband, Marty, was diagnosed with cancer. Thankfully he survived, but for the year of his treatment, Ginsburg cared for him, raised their 2-year-old daughter, studied for her own rigorous courses, and took notes so Marty didn’t fall behind in his law degree. Under a tremendous amount of pressure, she carried her entire family to health and success and made the Harvard Law review in 1957.

Upon graduating later on from Columbia Law School in 1959, Ginsburg tied for first in her class. However, when she was recommended for a clerkship with U.S. Supreme Court Justice Felix Frankfurter by Albert Sachs, a Harvard Law School Professor, Frankfurter responded that he was not ready to hire a woman and instead asked Sachs to recommend a man. The disadvantages brought on by Ginsburg’s status as a woman proved to keep coming, even when she joined the Rutgers Law School faculty in 1963. But her own experiences urged her to handle sex discrimination complaints later in life. As an attorney, Ginsburg proposed that men and women would “create new traditions by their actions, if artificial barriers are removed, and avenues of opportunity held open to them.” She argued and won multiple cases at the Supreme Court in the 1970s, eventually persuading an all-male bench to apply the 14th Amendment’s equal protection clause to sex-based discrimination. In 1972, she became the first woman to be granted tenure at Columbia Law School.

Impact in the U.S. Supreme Court and the Legacy Left Behind

While on the Court, Justice Ginsburg continued to point the way toward equality with opinions like United States v. Virginia, which held that the Virginia Military Institute’s policy of refusing to admit women into their ranks was unconstitutional. For her to write Supreme Court opinions on such injustice was poetic considering how many positions she had been denied for being a woman. In her time on the Court, our country witnessed the appointment of two more female Justices – Sonia Sotomayor and Elena Kagan. There’s no denying the difference she and other female justices have made in upholding or striking down laws that directly impact the lives of millions of Americans. Still, it’s also important to remember most of her legacy is preserved in her role as a young attorney advocating for civil liberties.