Roundup of Conscience: Where Roundup is Willingly Banned 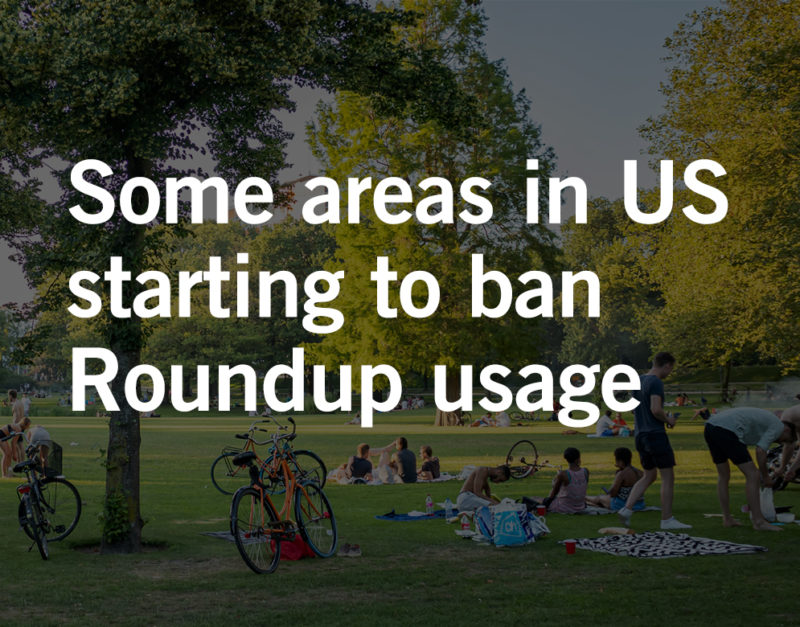 Roundup is a popular brand of weed killer. It uses herbicide to kill weeds and functions as a form of pesticide as well. The product uses chemicals intended to cause harm but in a controlled manner. The problem for Monsanto’s Roundup began with the false premise that the damage from a particularly harmful component, known as glyphosate, could be adequately controlled and limited to its focused use. Studies have revealed that Roundup’s main ingredient of glyphosate is linked to devastating cancers and illnesses, including leukemia and non-Hodgkin’s lymphoma. Roundup is not just used on farms—the U.S. uses 26 million pounds of glyphosate in its parks, schools, and gardens every year. Now, given the recent revelations of glyphosate’s harm, some U.S. states and municipalities have opted to discontinue or outright ban the use of Roundup—California’s state university system, Key West, Portland, Denton, and the New York Parks and Recreation Department—to name a few.

University of California Suspends Use of Weed Killer, Glyphosate, as Bans Mount Across the U.S.

California was one of the first states to issue a warning in the U.S. about the dangers of glyphosate. While the U.S. as a whole has still not banned glyphosate, states like California have banned its use in a significant number of its public parks and spaces, including the entire University of California system, affecting over 200,000 students. The suspension of glyphosate resulted from a campaign called Herbicide-Free UC, led by student-athletes upon discovering the courts they played on were treated with the dangerous herbicide.

Florida is known for its beach parks, natural springs, and golf courses, so it is no surprise that they would want to protect those attractive locations to keep bringing in those tourist dollars. With Monsanto being taken to court for monetary damages, removing Roundup from usage is a prudent move that protects city budgets from lawsuits. Key West City Commission said their choice to ban the use of Roundup on city-owned property was spurred by the massive $2.05 billion in damages awarded to a couple who contracted cancer from using the product.

Key West’s City Commission believed it would be too difficult to enforce a ban on private property, but Maine’s largest city of Portland sought to target this group of landowners. Portland has banned using synthetic pesticides on landscaped lawns, private gardens, patios, sidewalks, and driveways, which can also be affected by snow, causing runoff contamination. Now, Portland uses organic weed killer in place of harmful synthetic pesticides—but not without exceptions for certain athletic fields and its municipal golf course.

There are established measures for the New York Park and Recreation Department to eliminate pesticide use wherever possible or reduce it in areas under their control. The Parks Department took on this policy as an act of stewardship for what they consider natural and historic resources in their communities.

Denton Ends Use of Glyphosate Herbicide for City Parks

Denton, Texas, adopted an integrated pest management (IPM) program, much like one in Austin, Texas, to end its use of glyphosate herbicide. Their eighteen-year-old program initially allowed for Roundup in limited amounts, but their team replaced that allowance with a mandate for organic applications. More cities will need to follow suit to make an impact on such a large state.

For now, it is still mostly up to local government officials to determine which type of ban will be effective and enforceable since a nationwide ban has yet to take hold. The trend towards these bans on glyphosate for the sake of public health and liability protection provides some hope that integrity and common sense may prevail.

Seek justice with the help of our experienced attorneys. Our Dallas, Texas, pesticide law firm has battled corporate giants on behalf of individuals like you for over 20 years, aggressively fighting to hold companies responsible for dangerous chemicals and the cancers and personal injuries they cause. If you have suffered catastrophic injury caused by Monsanto’s Roundup or other harmful chemicals, we can help.