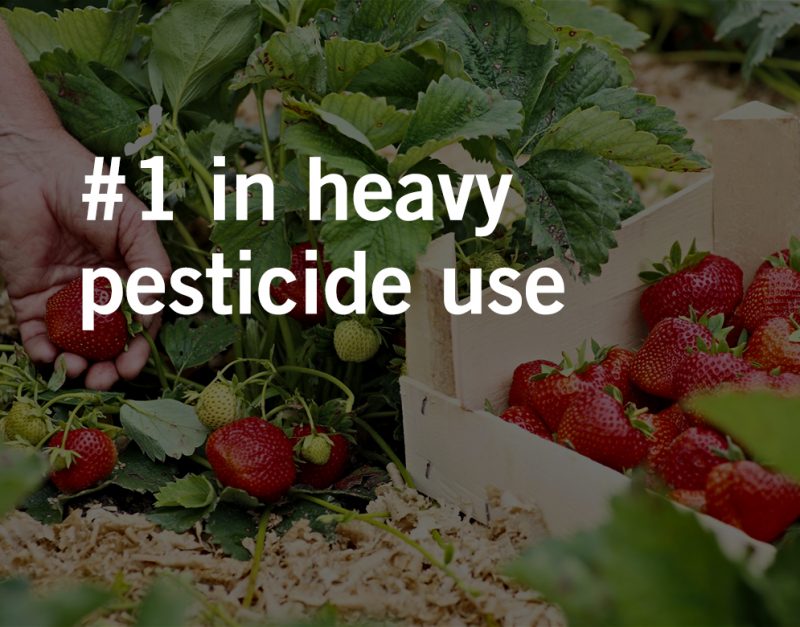 As a result of pesticide use, strawberries are named the dirtiest fruit.

They call them the Dirty Dozen — and in 2018, the sweet innocent strawberry led the list of produce with the highest pesticide contamination. Each year, the 12 “dirtiest fruits and vegetables” are ranked according to research conducted by the Environmental Working Group (EWG), a nonprofit, nonpartisan environmental organization. The EWG measures pesticide contamination in 47 well-liked fruit and vegetable favorites to come up with a list of the 12 dirtiest ones. While strawberries ranked the highest, roughly 70% of non-organic produce samples were contaminated with pesticides. A single sample of strawberries showed 20 pesticides, and more than 98% of strawberries tested positive for at least one pesticide.

What are Pesticides & How are People Exposed?

A pesticide is any substance used to kill, repel, or control certain forms of plant or animal life that are considered to be pests. The problem is that pesticides do not just kill their target pests. Pesticides harm the human population as well.

People are exposed to low levels of pesticide residues through their diets because of the widespread use of agricultural chemicals in food production. According to a recent study, women who ate more fruits and vegetables containing high amounts of pesticide residue were less likely to get pregnant or have a live birth following infertility treatments.

Farmworkers working on commercial crops and people who live in close proximity to agricultural fields are at high risk for exposure to toxic pesticides. If farmworkers, such as pickers or harvesters, enter the fields after being sprayed but before the pesticides have settled and dried, the farmworkers run the risk of coming into direct contact with pesticide spray.

If you have a child with birth defects and you worked on a farm, contact the birth defect attorneys at Waters Kraus & Paul at 800.226.9880. We have been representing families who have suffered as a result of toxic exposure for over twenty years.