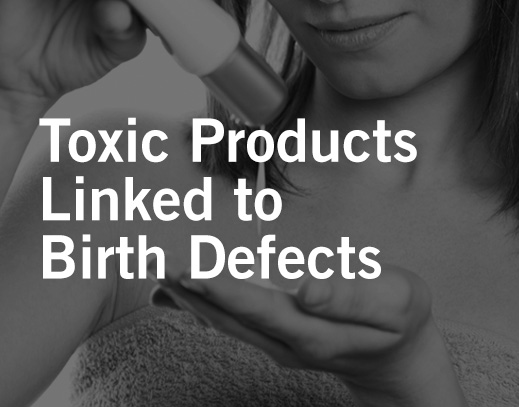 January 19, 2016 – When people think about toxic exposure to dangerous substances, images of Love Canal or asbestos remediation sites may come to mind. Most people are simply not aware that many commonplace household products can cause birth defects, genital deformities and cancer, including breast and prostate cancer. According to the International Federation of Gynecology and Obstetrics, “widespread exposure to toxic environmental chemicals threatens healthy human reproduction.”

Some of the most worrisome chemicals for the gynecology federation are endocrine disrupters, found in many products, including plastics, cosmetics, shampoo, cash register receipts and flame retardant sofas.

Citing a National Cancer Institute report, the gynecology federation warns that the hazard is particularly dangerous for pregnant women, who are unknowingly contaminated by dozens of chemicals that are passed on to their unborn children.

One of the birth defects that obstetricians are concerned with is hypospadias, where a boy is born with a urethra opening on the side of the penis as opposed to the tip. Hypospadias reportedly has been linked to exposure to endocrine disrupters at an early age.

The Endocrine Society — an international group of doctors and scientists specializing in the hormone system — has issued similar warnings, noting that endocrine disrupters pose a great risk when children are exposed in the womb.

Unfortunately, the U.S. government assumes that chemicals are safe unless proven dangerous. This means that countless chemicals are sold on the marketplace with no confirmation of their safety. Even when it appears that a substance may be unsafe, chemical manufacturers often argue that without studies of a chemical’s effect on humans, you cannot know whether the substance actually causes harm. Without sufficient governmental regulation or a meaningful commitment on the part of manufacturers to make their products safe, children are left to suffer with birth defects caused by exposure to endocrine disrupters.

The lawyers at Waters Kraus & Paul have been representing people who have been sickened by toxic exposures for more than twenty years. Do you have a child suffering from a birth defect or cancer as a result of exposure to pesticides, coal ash or other toxic chemicals? If so, call us at 800.226.9880 to speak with one of our birth defect lawyers, Peter Kraus and Susan Ulrich in our Los Angeles office, to learn more about how we can assist you.