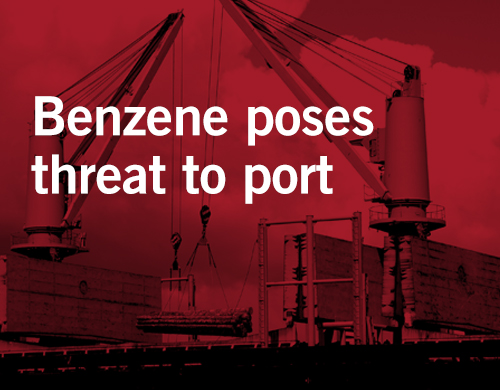 Staff offices for the Port of Astoria in Oregon have moved due to health concerns related to benzene exposure. Benzene is highly toxic and known to cause blood-related diseases. Port officials decided to pay almost $46,000 for an environmental review of the air quality in the Port’s former offices as well as a maintenance shop close by. The structures are located above an oil leak that has plagued the area for decades. “Because benzene is naturally occurring in crude oil,” says Susannah Chester-Schindler, one of the Waters Kraus & Paul benzene lawyers and a partner on the trial team that obtained the multi-million dollar Hood verdict, “the toxic substance is also found in petroleum-based products, including solvents, fuels, paint, and glue.”

During an Oregon state investigation carried out between 2004 and 2007, it was discovered that benzene was present in the soil gases underneath the Port offices. Port staff reportedly learned of this investigation only recently, after receiving a warning from former Port Commissioner Floyd Holcom. Concerns about possible health risks from benzene exposure led Port staff to move their offices into Pier 1. In addition, the location of public meetings has also been moved from the old offices to Pier 1 until an air quality review can be completed.

According to an industrial hygienist with the company that will perform the review, air samples will be taken inside the structures and from underneath the foundation to reveal the source of the benzene and whether benzene levels pose a health risk.

The Port of Astoria is negotiating with the Oregon Department of Environmental Quality and the insurers of the oil companies that caused the leak concerning a cleanup of the area.

What Are the Health Risks of Benzene Exposure?

Chronic exposure to benzene, even at low levels, can cause serious blood-related diseases, including acute myeloid leukemia (AML) and myelodysplastic syndrome (MDS). AML is a type of leukemia that targets bone tissue required for the formation of blood cells. Its treatment can require chemotherapy and bone marrow or stem cell transplants. MDS involves an injury to the bone marrow, which causes it to produce dysfunctional or immature blood cells. Doctors work to manage the condition with a number of drugs — growth factor medications, drugs to stimulate cell maturity, medications to suppress the immune system, and drugs to reduce the need for blood transfusions.

The Port of Astoria Commission chairman emphasized that the Port is “under a moral imperative” to act quickly to eliminate any benzene health risks. This has not been the attitude in many industries whose workers have been exposed to benzene for decades. The benzene lawyers with Waters Kraus & Paul have learned that the employers of many in the chemical and petroleum industries — as well as railroad workers, seamen, mechanics, and others — felt no “moral imperative” to protect their workers.

Contact Waters Kraus & Paul by email or call us at 800.226.9880 to speak with experienced benzene lawyers today.