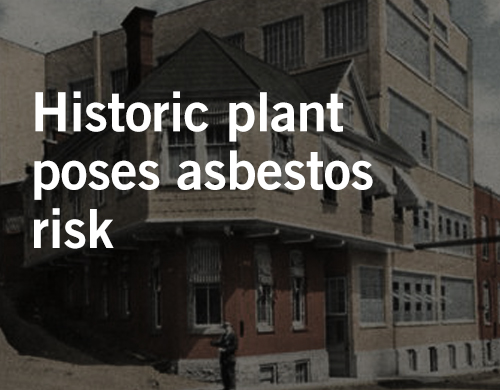 In response to a 2015 request from the mayor of Canajoharie, New York, the U.S. Environmental Protection Agency (EPA) has initiated an asbestos removal project at an abandoned New York paper sack factory. The EPA’s regional administrator announced in a press release that the agency is providing staff and federal funds to prevent any spread of asbestos during demolition of the old Arkell and Smiths Sack Co. factory in Canajoharie, N.Y. Peter Kraus, founder of Texas asbestos law firm Waters Kraus & Paul, explains that where proper precautions are not observed, asbestos exposure during building demolition is a very real threat: “The EPA has developed regulations that must be followed during building demolition — National Emission Standards for Hazardous Air Pollutants (NESHAP) — to prevent the release of asbestos fibers that could cause mesothelioma or other asbestos diseases.”

Arkell and Smiths’ built the old paper sack factory in Canajoharie, New York, during the 1860s. The company was the first to make packaging for flour and sugar out of paper rather than cloth. The original plant was destroyed in the 1870s and then rebuilt in the 1880s. By the time Arkell and Smiths’ sold the facility in 1952, the 2.6-acre site was home to a large 65,000 square foot factory with seven interconnected buildings.

After the property was sold again in 2007, it fell into disrepair. When the EPA conducted asbestos sampling in the buildings and debris in February 2016, the structures were dilapidated and falling apart. EPA investigators determined that the asbestos hazard could pose a risk to the surrounding homes located just 30 feet from the old factory.

The EPA will first remove the asbestos from the site. Asbestos materials will be wetted down to prevent asbestos fibers from becoming airborne. The asbestos will then be disposed of in accordance with EPA regulations at a permitted hazardous waste site. Air at the New York site will be monitored throughout the process. When asbestos from the plant is no longer a threat to the community, the EPA will demolish the old buildings.

“In cases where the owner of commercial property is seeking to demolish or renovate an asbestos-containing structure, the EPA’s NESHAP regulations require that the appropriate state or federal agency be notified,” says Gibbs Henderson, Texas asbestos law firm partner with Waters Kraus & Paul in Dallas. The EPA wants to ensure that the public is protected from the risk of developing mesothelioma or some other form of asbestos-related cancer. In some cases, state and local asbestos regulations are even more strict than federal standards.

It is the EPA’s position that companies that pollute the environment with asbestos or other harmful toxins should bear the cost of site clean-ups like this one in New York. As a result, the EPA will attempt to hold any liable parties accountable.