Fighting Fraud Against the Government on Behalf of Tax Payers 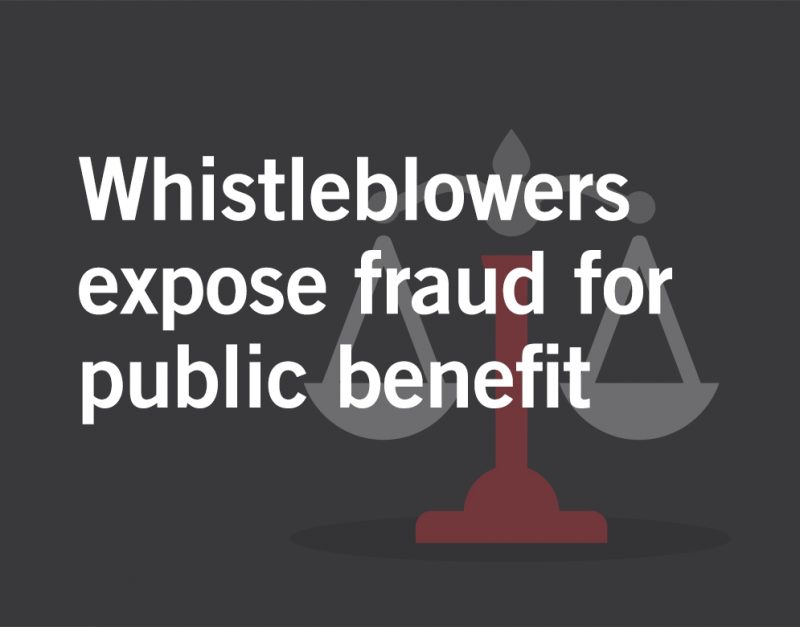 More About the False Claims Act and Fraud

The False Claims Act (FCA) was passed during the Civil War to combat defense procurement fraud. It authorizes private citizen whistleblowers (called “relators” under the FCA) to file suit on the government’s behalf against anyone who submits false claims for payment to the government. Nowadays, many FCA cases involve healthcare fraud—fraudulent claims for payment for goods and services covered by Medicare or Medicaid, for instance—and many states have their own versions of the FCA with similar incentives and protections for whistleblowers.

What Are Qui Tam Whistleblower Lawsuits?

Under the qui tam provisions of the FCA, whistleblowers are authorized to file lawsuits on behalf of the government and receive a share of the government’s damages and penalties recovered as a result. “Qui tam” is a Latin phrase that translates to “he who brings an action for the king as well as himself.” A whistleblower who files suit alerting the government to fraud is typically awarded between 15% and 30% of the amount that the federal government recovers from the lawsuit. And, should they face any adverse employment action as a result of blowing the whistle under the FCA, they may bring a retaliation action, seeking reinstatement and twice the amount of back pay, along with compensation for any special damages sustained as a result.

From 1986 to 2020, the FCA recovered more than $64 billion in taxpayer money, 70% of which was a result of qui tam whistleblowers reporting misconduct. In 2020 alone, relators started 672 FCA cases, recovering $1.6 billion for the federal government and receiving more than $300 million in relators’ share awards.

FCA whistleblowers allege a wide variety of fraudulent conduct in areas such as healthcare, defense contracting, and other areas involving government funds. The different types of cases that are prosecuted under the FCA include billing for services not rendered, upcoding, illegal marketing, defective testing of products, and many more. As qui tam lawyers, we’re proud to represent whistleblowers who play an important role in protecting the government and taxpayers.

Learn more about some of our recent FCA cases below:

One of the largest nursing home chains in the country, SavaSeniorCare, LLC agreed to pay $11.2 million to resolve a long-running case alleging that the company knowingly billed Medicare and Medicaid for excessive and unnecessary amounts of rehabilitation therapy and “grossly substandard” skilled nursing services. The U.S. Department of Justice previously intervened in the suit and announced the settlement on Friday, May 21, 2021. Waters & Kraus, LLP partners Caitlyn Silhan and Charles S. Siegel were proud to represent one of the whistleblowers in this matter.

In a suit filed under the whistleblower provision of the False Claims Act, brought by former Saber® Healthcare Group rehabilitation therapists and therapy managers, whistleblowers alleged that the nursing home chain encouraged the submission of false Medicare claims at its skilled nursing assisted living facilities. Saber agreed to pay a settlement of $10 million, resolving allegations that the company violated the False Claims Act by knowingly causing its facilities to submit false claims to Medicare for rehabilitation therapy services that were not reasonable, necessary, or skilled. The whistleblowers were represented by Charles S. Siegel and Wm. Paul Lawrence, II of Waters & Kraus, LLP.

Dr. Richard Malouf, the former owner of All Smiles Dental Center accused of committing fraudulent Medicaid billing practices, was found liable for approximately $16.5 million to the State of Texas after a decision handed down in August 2019. The ruling comes as a result of the court’s previous findings that Malouf fraudulently billed Medicaid for services that he did not deliver, including over 100 claims he filed while he was vacationing out of the country. The whistleblowers who filed the lawsuits under the Texas Medicaid Fraud Prevention Act were represented by Caitlyn Silhan and Charles S. Siegel, partners at Waters & Kraus, LLP in Dallas, Texas.

Waters & Kraus client and whistleblower, Dr. Abdul-Majid, brought the two dental companies to the OIG’s attention. The two companies received the high-risk classification after facing allegations of fraud and refused to sign a Corporate Integrity Agreement. The companies were accused of overbilling for simple dental work and billing patients inappropriately for services that were either never performed or medically unnecessary. As a part of the settlement agreement, the OIG determined that the companies required additional monitoring and requested that they sign a Corporate Integrity Agreement. When the companies refused to sign the agreement, the OIG decided they should receive the high-risk rank.

Medicaid whistleblowers in Dallas filed a lawsuit that resulted in a $235.9 million settlement, the largest single Medicaid fraud-related settlement in Texas. The allegations against Xerox Corp. involved conducting fraudulent billing practices. Xerox violated their company contract with the state when unqualified employees approved authorization requests without verifying the medical necessity of the services being requested. The company’s failure to accurately manage the authorization program led to taxpayers funding dental and orthodontic procedures that were medically unnecessary. With the help of whistleblower attorneys at Waters & Kraus, the state proved that the company’s actions compromised the integrity of the Texas Medicaid program.

In 2018, whistleblower attorneys at Waters & Kraus settled a qui tam lawsuit against a medical equipment provider for $1.634 million. Allegations centered around a telemarketing scheme targeting Medicare beneficiaries. The company was accused of conducting a bait and switch scheme that violated Medicare’s guideline against unsolicited telemarketing and the FCA. The scheme involved telemarketers who initially claimed to be selling identity theft protection, but would trick beneficiaries into buying knee and back braces even if they did not need them. Federal prosecutors worked with the whistleblower attorneys at Waters & Kraus, ultimately settling the case and shutting down a scheme that targeted a vulnerable group at the taxpayers’ expense.